Posted on January 2, 2010 by berkeleybarb

Well, what a way to start! This is an unusual dinner for us for at least two reasons. One, meat was the center of the meal, and two, we had a sweet dessert. It was a major holiday dinner, but with two of the three cooks a bit under the weather, we went for food that was pretty simple to prepare. 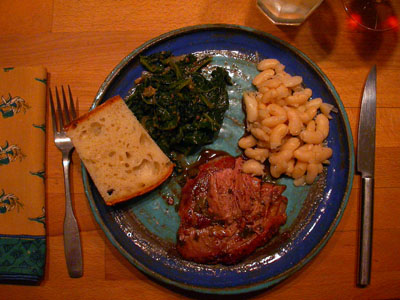 Lamb Merlot – from California Fresh, by the Junior League of Oakland / East Bay (a book that was our ultimate gourmet cookbook a couple decades ago, but now seems a bit middle-of-the-road; nevertheless, of very high quality). The lamb is marinated overnight, principally in sesame oil and a bunch of herbs. The marinade ends up boiled a bit, with some added merlot, and serves as a sauce for the meat. We thought it would have been nice to have a baked potato, or mashed potatoes with or without parsnips mixed in, to pour the sauce over.

Kale,  boiled, then sauteed with cooked garlic and onions, and finally mixed with a bit of gravy from the lamb drippings (D’s idea – it worked!)

Cannellini beans – a recipe by Paul Bertolli in Chez Panisse Cooking (highly recommended); after soaking, boil with garlic and rosemary in the water, and a little salt – a staple for our house.

We got a 2003 Juslyn cabernet from Grocery Outlet, and it was terrific.

Dessert was tiramisu, made by R. excellent and most self-indulgent! 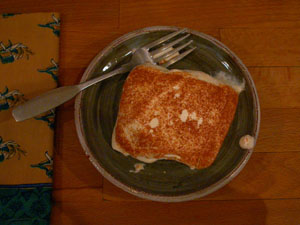 We return to real life tomorrow.