7 August 2010 – Lamb chops and eggplant salad with balsamic vinaigrette; wine to die for

I found this recipe in Weber’s Big Book of Grilling. Their meat recipes are great, but their sides are often positively inspired. 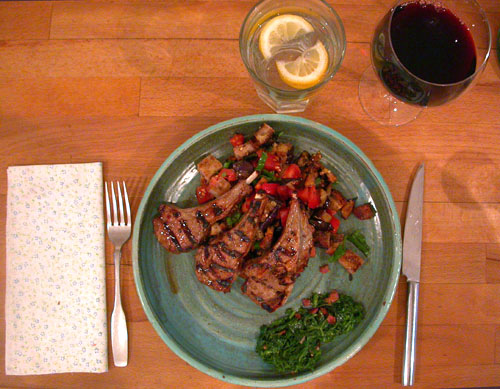 In this case, you start with a balsamic vinaigrette; you marinate the chops in it; you brush the bread slices and eggplant slices with it and grill them; and you finally toss the eggplant-bread-tomato-basil salad in the remainder of it. 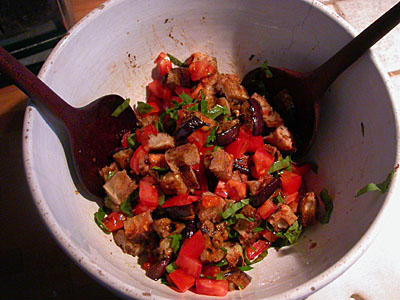 It’s really a spectacular dish. When D heard what I was making, he suggested we bring up a wine that was a gift from the winemaker, a former student of mine. It was an inspired match – a perfect accompaniment for this outstanding wine. A real Wow dinner for a random Saturday night!

I shouldn’t forget to mention the mustard greens, which I cooked more or less according to R’s favorite method: I diced a slice of bacon and cooked it till almost done, then added the greens, which had been stacked, rolled up tightly, and sliced into thin strips. Cooked briefly, then covered till dinner was ready (a few more minutes). This is a terrific veggie, though admittedly probably not the most healthful way to serve greens. 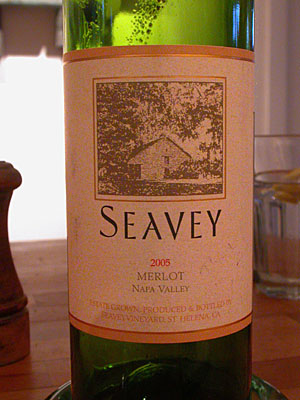 …one of the best wines, and one of the  best wine/food matches, we’ve had in a long time! 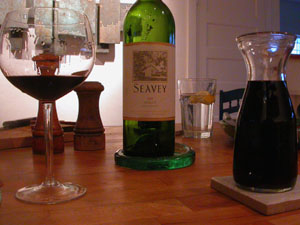