Posted on September 18, 2010 by berkeleybarb

D came home to realize there was very little bread or much of anything else. After some conversation, he decided (with my encouragement) that having BLTs again would be ok, if he could find good bread in the freezer to add to the little of his loaf that was left. He found the end of a rustic baguette, so we were on.

The things we did have in profusion were tomatoes and avocados, so he made his tomato/avocado/balsamic vinegar concoction again, which was great. D brought up a wine we haven’t had in awhile, a Nerelo del Bastardo, which says something cryptic on the back as though it dare not speak its real name. It’s good, and also comes in a rather nifty bottle: 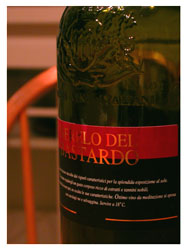 This entry was posted in Meat as a flavoring, Sandwich and tagged Avocado, Bacon, Sandwich, Tomatoes. Bookmark the permalink.