This is a favorite soup of mine, which is great for the cold of winter. It was moderately cold and we are getting premature rain this year, so I decided to go for it. Eventually, with the warming through the week, I decided to freeze some leftovers for future, easy lunches or dinners.

This soup is based on red lentils, which are very beautiful – 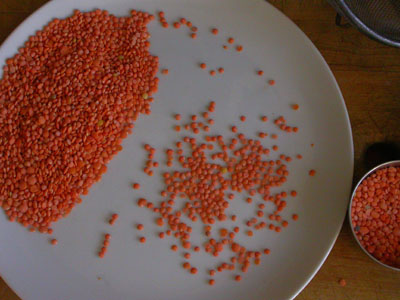 unfortunately not as much so after cooking. It’s from “The Sultan’s Kitchen” by Ozcan Ozan. The base is chicken broth or water – I just use Swanson’s chicken broth, which has exactly enough for this recipe in one big can (6 cups). The soup also includes rice and a bit of bulgur, and some cayenne and dried mint. At the end, you melt a bit of butter (should be clarified butter but I am too lazy) and stir in paprika, and garnsh the soup, and then add a bit of dried mint to the top.

For the veggie, I sauteed two heads of baby bok choy in oil.

I also got out these pretty placemats, which are very wintery to me – kind of like having a fireplace to warm you up 🙂

I also made new bread, with 1/3 whole wheat flour, and about 1/2 cup Grape Nuts fines from the end of the box.

I don’t remember what wine we had with this 😦