Last night’s beautiful, long eggplant served for two dinners. The slices grilled with just olive oil on them (and a little salt) went into this pasta. I also grilled a big, beautiful red pepper today for this dinner.

I started by dicing about 1/3 of a large yellow onion and cooking it in olive oil, mostly rather slowly, till it was very soft, then adding the diced, grilled eggplant, the chopped red pepper (all but one face of it)… 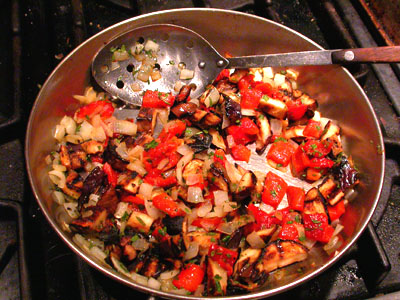 …and herbs from the garden (stems of marjoram, a 3″ sprig of rosemary, and several little branches of thyme, all chopped together).

I cooked these together, and added a tiny bit of pasta water to tie it all together. At the end, I added a bunch of Corsican feta left from my pizza on the ninth, and a bit more pasta water, and tossed in the radiatori, mixing thoroughly.

D suggested a small salad to go with this. He had bought some romaine, and I had some baby lettuces left over, so I mixed these, and tossed on some diced tomatoes that I had soaked in balsamic vinegar, b/c they were not up to the standard we have come to expect. I’m afraid it’s about time to give up tomatoes till next July 😦

This afternoon we went to a tasting of wines imported by one of our favorite importers, Eric Stauffenegger, and we had one of his wines for dinner.    It was superb. The recommendation was to serve it with ratatoille or other roasted or cooked vegetables, so we thought this would work, and it did. The wine is called “Cairanne”.