Pasta with… chicken and mushrooms… and potatoes! – 14 February 2011

D was using up the marble-sized mixed potatoes he boiled up awhile ago, plus some of the roast chicken. He cooked these with some mushrooms and served them over spaghetti. It was fun 🙂 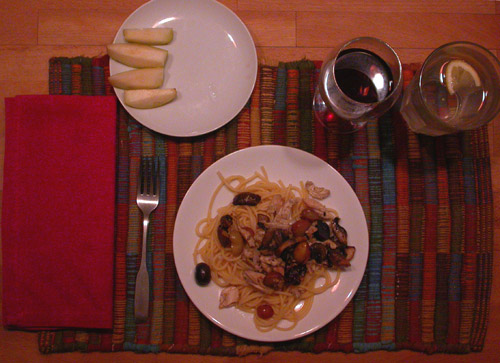 He decided after the fact that he should have used some herbs in the mix – perhaps rosemary? – but it was really just fine.

He started us off with an appetizer of a half avocado with the last of the pickled onions over the top. That is a terrific combination. I’ll have to put the pickled onion recipe on my Pollanite blog. He served it on the same plate as dessert – a very good little pear – and we munched it standing up at the island.

He chose Monte Antico to go with the meal, and I really enjoyed it. It’s a tasty wine. I think if I have a half bottle it gives me headaches, so it’s not a great weekend wine – but it’s not very expensive, so certainly works for the weekdays. It’s 85% Sangiovese, 10% Cabernet, 5% Merlot, and we get it from Costco for not much. D thinks maybe $10 but I thought less.