Another attempt at Pizza Margherita – 17 February 2011

Still not quite right, but I know what to try. Writing this almost a month later (15 March), I know that what I tried worked, too 🙂 I think it was on the 3rd. 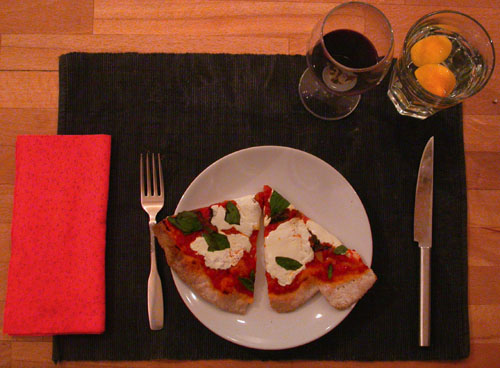 I got home late and made a Patricia Wells “insta-crust”, which I have never been convinced is nearly as good as a normal crust. However, it’s much better than not having pizza. I think I rolled this one too thin. Made 1/3 of a recipe b/c I wanted a small pie this time.

I made a new batch of sauce, and put in more basil. I used a different fresh mozz (fior di latte) from Cheese Board that one of the members liked best, but I am not convinced it was wet enough. Terminally cute, though.

Here’s the whole pizza, on its half-whole-wheat crust, a la P. Wells:

No wine photo so I must have had leftover wine with this.