This is pretty much the same dish as is shown second from left in the banner above, and described in the post linked in the Banner Photos page. It’s from Georgeanne Brennan’s Potager, a stupendously good cookbook. It’s a favorite dish of ours, but it has a lot of pieces so it’s not something we make all that often.

One part is the savory pancakes. They’re just pancakes without sugar; they have melted butter in them, and also sliced scallions, and are cooked in vegetable oil rather than olive oil (very unusual for us to use another kind of oil than olive). Three pancakes per serving. I cooked those, though D mixed them up. Dandelion greens: this is the season when they are in ample supply in our yard. My Dad would be astonished to see us nurturing dandelions, when his major goal was to eliminate them from his lawn. The dandelion greens are cleaned and steamed. If they are old, the central stem should be sliced out, but these weren’t. Bacon: normally a couple of bacon slices per person, but we had pancetta that wanted eating, so obviously D used that. Cooked as usual, to a fairly crisp state. Parsley butter: melt the butter and stir in chopped flat-leaf parsley leaves. 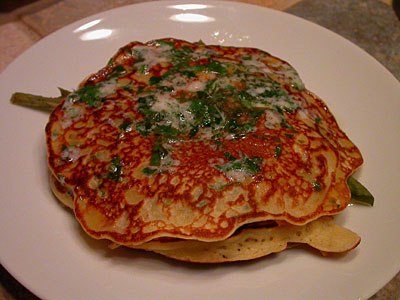 D served us a little tray of cold veggies to go with this. Cutest little cutting board… I found it at the Bowl a few months ago. 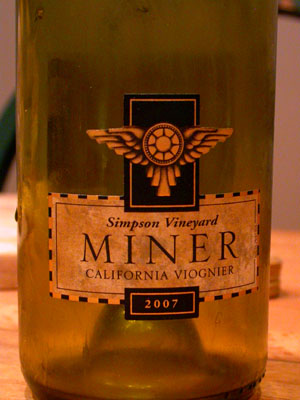 Finally, the wine: bought this at Miner a year or so ago when up there visiting a friend who is a winemaker. He had a friend at Miner, and she was terrific. This Viognier was very good, but wow, too much alcohol for us to drink the whole bottle – which we noticed too late.