We go all-American on the 4th of July. Though today I decided we should make that either “the foods our grandparents brought from the old country” or “foods of people who make up America.” R pointed out that the latter means, basically, everybody, and the absence of limits leaves no challenge to it 🙂 We’re working on this concept for next year. However, for this year, it was the usual: hamburgers!

You will forgive us for not having all-American hamburger buns, I trust? The Bowl is closed on major holidays, so no fresh bread around the corner; so D decided just to make hamburger buns for ourselves. He made up a batch of no-knead bread last night, and at the “turn it out onto a board” point, he took two portions and made what he thought were bun-sized pieces to proof alongside a reduced-size loaf made from the remainder. After the 90 minute proofing, however, he discovered that the buns had risen to be way too large. He just removed parts of them and put that dough with the main loaf, reshaped the buns and stuck them into the 450 degree oven on little stones.

They seemed nicely done in 25 minutes. The folded bottoms are typical of the way D plops no-knead into the oven or dutch oven.D sliced the buns crosswise and grilled them for a bit on the Viking grill while the hamburgers were cooking. Really, this was about as good as hamburger buns could possibly get.

The hamburgers, also, were delicious. D took 1/2 pound of ground beef (frozen from a previous Costco trip and defrosted today) and added onions, garlic, Worcestershire sauce, salt and pepper. He mixed them by hand and grilled them perfectly. He put Romaine on the buns, and we added our own condiments; for me: mayonnaise and ketchup!

D boiled up 3 Yukon Gold potatoes, I think already cut into bite-sized chunks, and then fried them with onions, garlic, parsley, rosemary, and olive oil. They were entirely delicious! He also cooked up the rest of the broccolini I had cleaned the other night, boiled it for a minute, and tossed with lemon zest and garlic in the usual fashion. 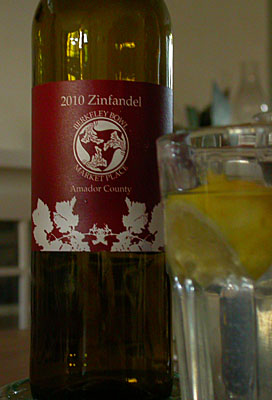 We had a new Berkeley Bowl wine with this dinner – a 2010 zin – which we found at a tasting there on Saturday. We liked it pretty well, and bought a couple bottles with their $1 off coupons at the tasting. It went very well with the meal, and we enjoyed it.

Here is the main (tiny!) loaf of bread and the two hamburger buns: 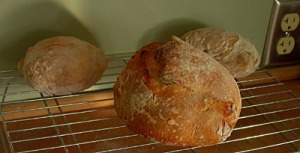 At this writing we have not yet had the other all-American food: apple pie. D has been culling green apples from our beleaguered apple tree, and he made the filling using those – about 6 cups, when cut up – and the old Joy of Cooking recipe. I made the crust. We had no Crisco, which I’m used to, but our friends N&M had left us some “organic leaf lard” when they were leaving the area with no refrigeration for days, so I took that out of the freezer and used it. We’ll see how it turns out. Looks good so far, though. D says he needs to remember to use 8 cups of apples rather than 6, though.