D is cooking again. He got home well after 7, and cooked up a quick and yummy dinner. 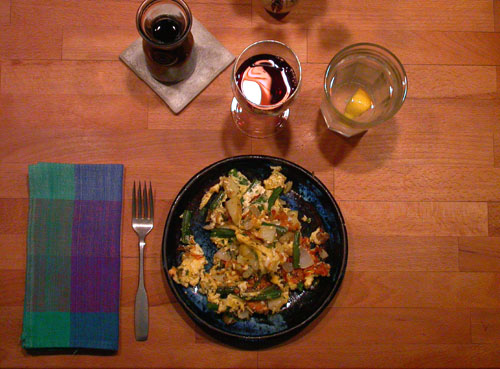 I think part of his goal was to use up the ends of things. When I made the potato pizza on Friday, I boiled up all three of our Yukon Gold potatoes, and used only the large one, so D cut up the other two for this meal. Also, for the ravioli, I bought really light, fluffy, fresh ricotta from the Cheese Board, and he used that up, too. D bought some green beans at the Bowl last Thursday (I think it was) and he boiled up a bunch of those for this dinner. He started with chopped onions, cooked in olive oil, then added garlic and the boiled potatoes, then the cooked beans, and three scrambled eggs with ricotta, parsley, tarragon, salt and pepper. I recognized the tarragon taste as familiar, 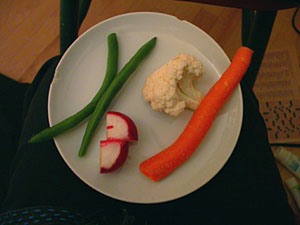 but it took me a minute to figure out what it was. I finally got “chicken” off of it, and realized it was something we have with chicken.

Before he cooked the fritatta (more or less) D brought me a plate of cold veggies – half a large radish, some cauliflower, a carrot, and two green beans. We had a slice of D’s no-knead bread with dinner, too. 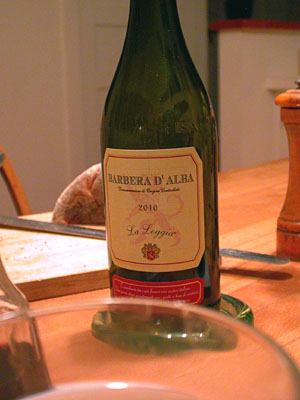 D chose a 2010 Barbera d’Alba from Trader Joe’s ($6.99) which grew on me over the time we had dinner. It was not terribly complex (hey, what do you want for $6.99?) but light and pleasant-tasting. We have another, so it will get a second chance to intrigue us. Also, we have 1/3 of this bottle for Wednesday night. D wants to get out one of the Epicuros for tomorrow, and put the two leftovers side by side on Wednesday, when we are scheduling a “rescue the basil before the frost and make pesto” evening.