Posted on November 7, 2011 by berkeleybarb

D was cold at work today and came home wanting a hearty, warm dinner. He decided to make chili. 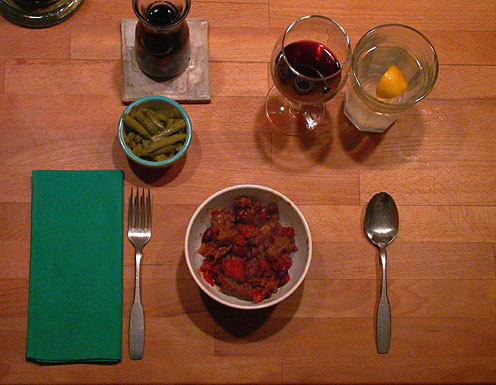 He cooked the remaining more-than-half of a yellow onion from the fridge and some large garlic chunks in olive oil, then added 1/2 lb hamburger and a chopped Anaheim chili. Finally, he added a can of kidney beans, a can of black beans (both drained) and a can of diced tomatoes (with juice), salt and pepper, and: piri piri; 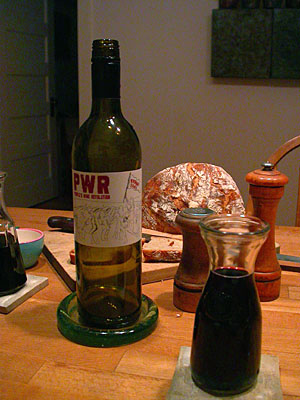 Worcestershire sauce; beriberi; and some red wine he previously found to be not worth drinking. It was great!

He also opened a can of green beans. {Who are you and what have you done with my husband?} We got a major flash of Cafeteria Food from this, but with butter on top, they actually had some appeal 🙂

D made a new no-knead bread today, which was terrific (as usual). He used 1/6 whole wheat flour and 5/6 King Arthur bread flour.

D chose PWR Syrah for this meal – a forceful wine that would stand up to an opinionated meal, but also with some sweetness that would work with the chili. He was right – it was a great wine to have with the chili.