This is an incredibly easy soup, and incredibly delicious, especially for a chilling evening in December. I think it is better when there is more meat on the soup bones, but this one was still quite tasty. 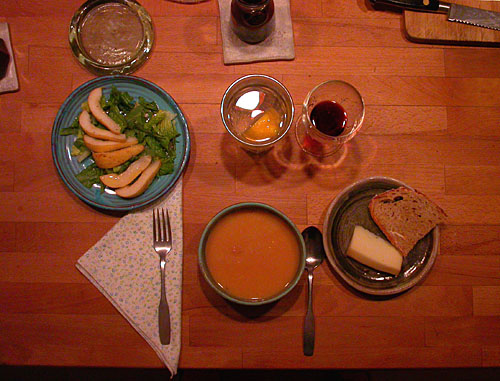 I started the soup a day in advance, the better to defat it. It is usually made with green split peas, but we had just enough yellow ones and too few green ones; plus, the yellow ones had been around for quite awhile and wanted eating. Two green ones had indeed made their way into the yellow pea bin, but not enough to alter the color of the soup. 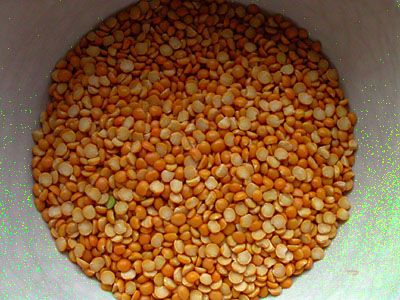 Step 1: look for things that are not split peas. I measured 2 c of split peas, and then poured them a bit at a time onto a white plate, so as to see any interlopers easily. One might find a pea-sized rock, for example. I found only a couple unwanted bits. Then I put the peas into a medium bowl and covered with cold water, swished them around to rinse, and carefully poured off as much water as I could. Repeated this a couple times. 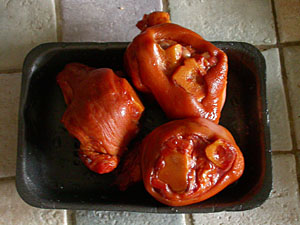 I rinsed three smoked ham hocks – about 1 1/2 pounds, and called by their producer pork hocks – and put them into 2 1/2 quarts of water with the peas, brought to a boil and let simmer for a long time – could have been a couple of hours but really, I didn’t look at the clock. I pulled out the ham pieces and rinsed the peas off them into the soup, and let both cool. When the ham is cold, I typically remove the meat and replace it in the soup; however, there was almost no meat on these bones. Odd. Any fat rises to the top of the soup and can be removed after chilling. This time there wasn’t much, which was puzzling. A layer of consomme-sort-of-gel was on top, but it wasn’t fatty, so I stirred it back into the soup today while reheating it for dinner. The ham hocks are cheap – $2.99/lb – and also very salty. There is no need to salt the soup. These cost just under $4.50, but I remember in the past spending more like $7.50, so perhaps these were unusually small. 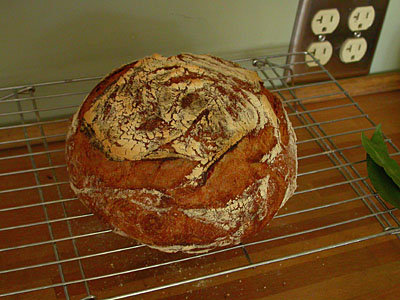 D made a new no-knead bread today (of course, that means he actually made the dough yesterday…) and it was beautiful again (of course) and delicious (of course…) 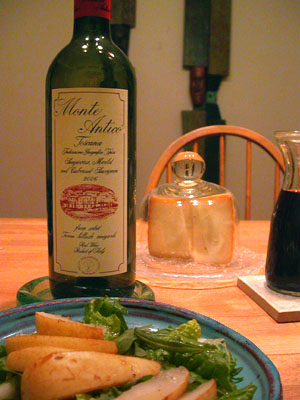 The salad was one ripe Bartlett pear (Bartletts are great: they tell you when they’re ripe and they are juicy and quite delicious) the last of the romaine, and some arugula. I made a dressing of olive oil, red raspberry vinegar, salt and pepper. It was a really nice salad (again). I also served some wedges of Petit Basque cheese, which I took out of the fridge several hours before dinner so it would get to a nice temperature. It is a fascinating and delicious cheese. Costco carries it, here.

D pulled up a cheap but very tasty wine called Monte Antico, which we get at Costco – or used to… they didn’t have it when we were there earlier this month 😦