Posted on January 9, 2012 by berkeleybarb

We’re on our second scheduled night of watching The Singing Detective, having simple dinners that are on time and fairly quick to eat so we aren’t up all night. I chose a panini recipe from the ‘ino cookbook Simple Italian Sandwiches, and I really thought it was good. I’m pretty sure D liked it, too.

The sandwich starts with a ciabatta roll with the top sliced off, and then the rest, about 1″ thick, split horizontally. The pre-made parts are pesto and peperonato. For the pesto, I just used one ice-cube-sized piece we had previously made and frozen, though the cookbook uses walnuts in their pesto, which we don’t. But that was good, and really just enough to cover the top slice (inside) of the ciabatta. The peperonata is made with red peppers, cut in 1″ squares, says the book, but the photo in the book doesn’t look like that, so I used more like 1 cm squares. 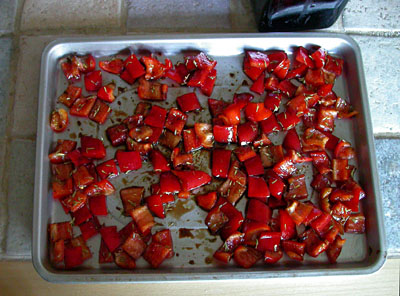 These are tossed with olive oil and thyme and roasted at 350, or so the recipe says, in a toaster oven. It is not unlikely that our oven is a bit off on the temp, but anyway, this totally did not cook to softness in the alloted 25 minutes (stirring every 5). I ended up upping the temperature to 400 for 10-15 minutes to finish it. D wonders what this would be like with fresh thyme. The dried-thyme flavor is quite prominent – and very good – so using fresh would definitely change it. 1/4 cup of peperonata is spread on the bottom (inside) part of the ciabatta.

Finally fresh mozzarella “sliced thin” is put over the peperonata, the sandwich is salted and peppered and closed up, and grilled on a panini press. Interestingly, the oil from the pesto oozed through the top crust so it looked quite as though it was grilled in oil. This was delicious. I tried using the cheap ($7.99/lb) “fresh” mozz at the Bowl which is not packed in brine. I know this works well for the eggplant sandwiches – also grilled, and which I will make to use it up – so decided to try it. I was tempted by the Bel Goioso little packets which were much more expensive, but decided to go with the original plan, and it worked fine. 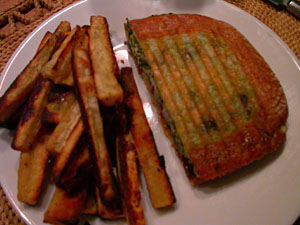 I made more of the sweet potato “fries” we had … when… Christmas? Sweet potatoes (I used one monster 1 lb potato) are cut into thick French-fry-like stalks, tossed in bacon fat, salted and peppered, and roasted at 450 for 45-60 minutes. Since I was not using the original recipe, but just using up bacon fat we generated at lunch yesterday, I didn’t know the quantity and underestimated a bit (used about 1/3 of the fat from 5 full slices of thick-cut bacon). They were good, but not as good as the original. The original recipe also has the bacon in a vinaigrette tossed over the finished fries, but I, and I think everyone else (being 2 people) liked them as well or better (moi) before the vinaigrette was added. And that sure leaves out a lot of the bad-for-you stuff. So, they were good but not fabulous.

D chose an Epicuro Salice Salentino from Trader Joe’s, and we enjoyed it a lot, even taking our last glasses in to watch The Singing Detective, parts 3 and 4. Best TV ever made.

Panino, up close and personal