Posted on February 1, 2012 by berkeleybarb

D is cooking now, and he made a tasty omelette. 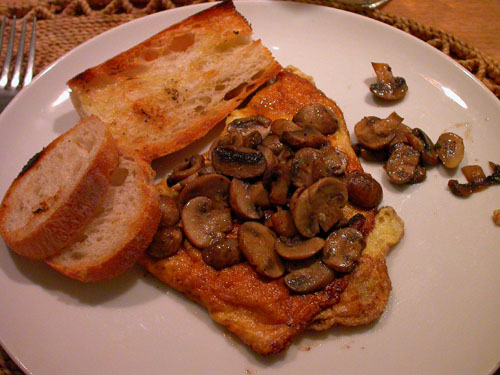 He sauteed sliced white mushrooms in olive oil. Separately, he mixed 3 eggs with “some kinda Swiss”, grated. Probably some milk, but he is busy typing so I am not likely to get a good answer at the moment. He and R evidently had part of an Acme Sweet Rustic Baguette for lunch, and he toasted the rest gently – some cut lengthwise, some into little rounds (why I have no idea), on the grill.

He chose a bottle of Trentatre Rosso from Trader Joe’s. It has a good taste, but was slightly corked, something neither of us entirely noticed till late in the meal when it began to grow on us. Good wine though.