Posted on February 2, 2012 by berkeleybarb

D made a simple spaghetti sauce with a 28-oz can of San Marzano tomatoes and some more of the gargantuan basil leaves from the packet I bought last week.

He did a good job of using stuff I had neglected, like the pomegranate I bought for a meat/pomegranate sauce dish which I then forgot to garnish, and also the ends of some endives that we never used up. The salad was especially pretty, with the red/purple seeds 🙂 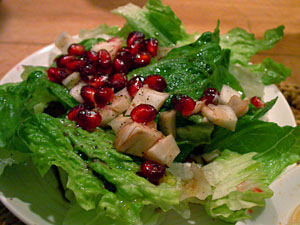 He brought up an Epicuro Aglianico, which was fine but nothing great; otoh what do you want for $4.99. 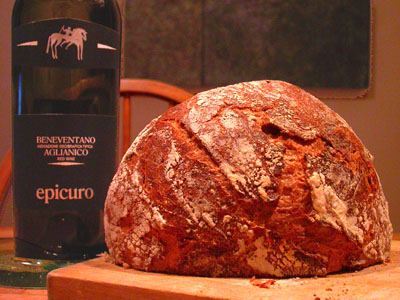 D also made no-knead bread again, starting yesterday. He used 5/6 Central Milling flour, which we get from Costco, and 1/6 King Arthur whole wheat. It was delicious. Also, it was beautiful again 🙂