Posted on February 3, 2012 by berkeleybarb

D went to Berkeley Bowl on his way home and bought a Butcher’s steak (“cheaper than flatiron”) and some Blue Lake green beans in a discount bag for 99 cents, and, adding a risotto, made this into a Christmas dinner (a dinner to have with my Christmas “wine of the month”). 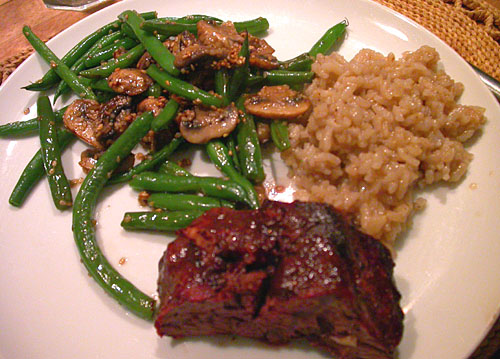 He opened several cloves of garlic, cut then lengthwise, and stabbed them into the meat before grilling it laid on top of a stem of rosemary from our bush. 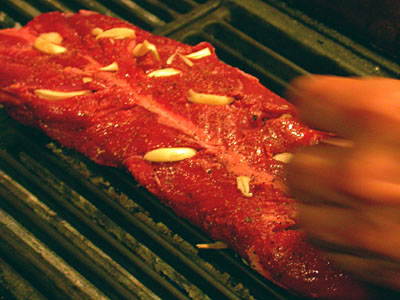 He boiled the beans, then reheated in butter with sauteed mushrooms, sesame seeds, salt and  pepper. This is an attempt at his sister G’s recipe, which D&R really enjoyed at her house. Very good, though D thought (and I agree) that he put a little too much thyme into it. The risotto is riso cooked in olive oil till well coated, then in a goodly splash of Valreas from awhile ago that was deemed undrinkable at the time (corked?), then a bunch of Swanson’s chicken broth, with parmesan added in near the end. 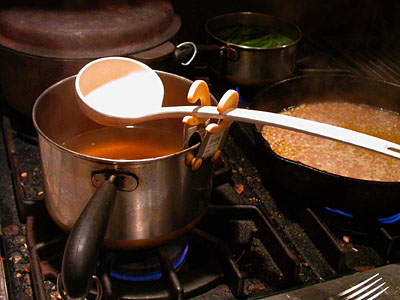 D chose a wine from our recent tasting at Solano Cellars, of Kermit Lynch wines. Major Wow. Bernard Beaudry Chinon, Les Grezeaux 2009. 100% Cab Franc. Dark, earthy. Absolutely outstanding. It cost us $28 minus 15%, and I wish we’d been able to buy a case.