I called D from Grocery Outlet, and he suggested I look for some prepared meats from Fra’ Mani and other notable producers. While I didn’t find those, I did mention seeing some boneless pork loin chops for a good price ($4.99/lb) so he said I should get those and he would make them for dinner. 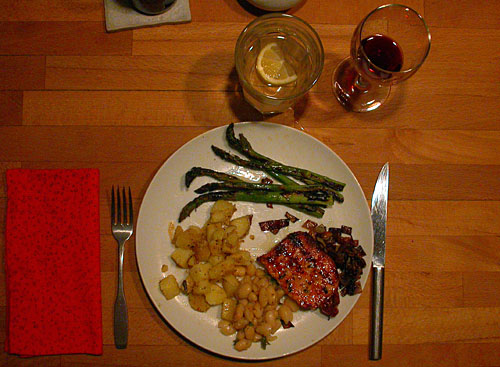 He grilled the chops, with sage on them,

and also grilled some asparagus he’d bought last time he was at the Bowl. He put butter and lemon juice on the cooked asparagus. He boiled some two Yukon Gold potatoes in salted water, and cut maybe two of them into large chunks, and recooked them in butter, with salt and pepper. He heated up some of the cooked cannellini in olive oil with winter savory. He also diced some red onion and cooked slowly in olive oil, and just served that alongside the pork chop. It was a very comfy and satisfying meal.

D also baked a new no-knead bread today. He put it together yesterday, of course; this time he included 1/6 buckwheat! It was delicious! 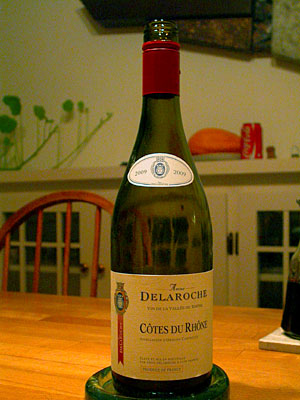 We had a wine I got to try out at Grocery Outlet – a 2009 Cotes du Rhone from Anne Delarouche. We liked it quite well, and hope to get back to G.O. for more before they’re all gone.