I got home after 7, but had known in advance that this would be a hard day, so I planned on an easy dinner. 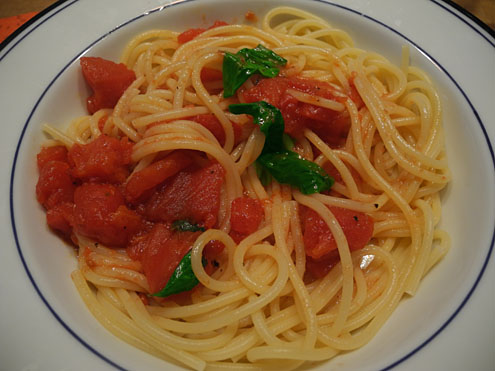 I made the world’s simplest pasta, from the Ten Speed Press book by Diane Seed, “The Top One Hundred Pasta Sauces.” I poured about a tbsp of olive oil (De Cecco – great smell!) into a sauce pan and heated it briefly, then tossed in a 14 oz can of diced tomatoes from Costco and cooked five-ish minutes. I added several grindings of pepper and 1/4 tsp of salt. I stopped the cooking and stirred in about 10 basil leaves, which I had stemmed and therefore torn into two halves. Cooked the Costco (Garafolo) spaghetti the requisite 11 minutes, scooping out some of the cooking water a couple minutes before the end to warm the bowls. 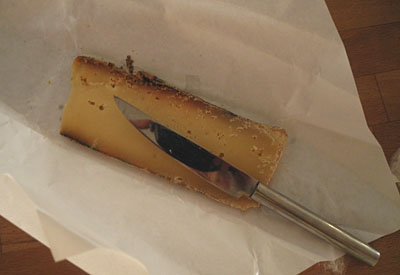 We had a couple of edges of last night’s foccacia for our bread, and also some really neat fontina valle d’Aosta that I got for the heck of it at the Cheese Board last Saturday. It was “unintentionally aged,” said the collective member, but they thought it was interesting so they were selling it. Indeed it was – it went wonderfully with the foccacia and the pasta both. D also got out some of the Cheese Board marinated olives, which were tasty.

D cut up some radishes to munch before dinner.

{Drafted the 10th, pictures added and posted the 19th}