Eggplant sandwiches where the eggplant is the bread; grilled radicchio wrappedin prosciutto – 26 May 2012

I made two dishes that went together pretty reasonably  – both on our range’s grill. 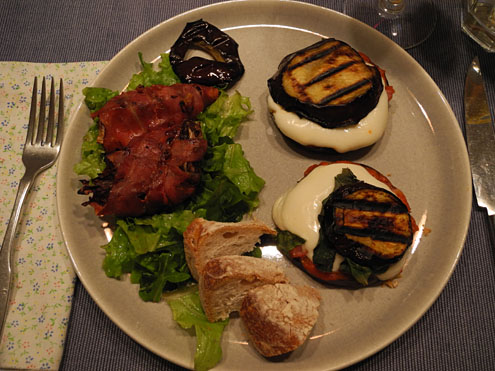 The first was eggplant sandwiches where the eggplant slices are the “bread”. For two of us, I brushed 8 slices of a globe eggplant (maybe 5/8″ to 3/4″ thick) with olive oil and grilled four of them on both sides, the other four on one side. The ‘one side grilled’ slices are put ungrilled-side-down, and on top go a Tbsp of roasted red pepper puree (I made a lot when peppers were on sale and tonight just defrosted cubes I set in an ice cube tray) then a bit of prosciutto, some fresh mozzarella (a cheapo version, which is just fine for this dish) and some basil. 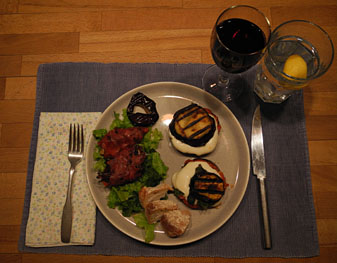 The both-sides-grilled eggplant slices are put over the top, and the lot is returned to the grill for 2-3 minutes to grill the last side of eggplant, melt the cheese, and heat the whole thing. It’s a recipe from Weber’s Real Grilling. Weber books are terrific. 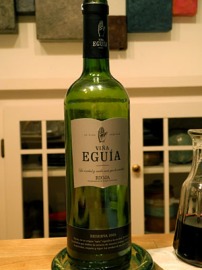 The other item is something we had at L’Osteria del Forno in SF and did for ourselves. Wrap a wedge of radicchio in prosciutto and grill on all sides (on medium, so the prosciutto does not get overdone before the radicchio cooks). I served this over a bunch of baby lettuce from our garden, tossed in a light vinaigrette. We really enjoyed this 🙂

Had an Eguia Rioja (riserva 2005) with it that we got on a really good sale at a Vintage Berkeley. 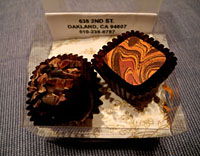 Later we divided two truffles I bought at the Grand Lake farmers’ market today – one Cabernet and the other with cocoa nibs. Both sumptuous 🙂

{Written the 26th, edited, photos added, and posted the 27th}