Spaghetti with haricots and olive tapenade – 27 May 2012

Since we had Gaeta olives, which are the best for tapenade, D proposed a few days ago that he make this pasta, which is from Chez Panisse Pasta Pizza and Calzone.

The tapenade has olives, olive oil, anchovy fillet, garlic, and a bit of Cognac or brandy. D boils the pasta water and cooks the haricots in it till just done, removes them, and cooks the spaghetti.

He also made a new loaf of bread today that was a hybrid between our usual no-knead bread and an old favorite recipe from Classical Italian. Since we forgot to start a no-knead loaf yesterday, D made a dough from the Classical Italian book and treated it like no-knead bread for its second rise and baking. He folded it and mooshed it a bit after the first rise, and let it sit 2 hours, starting the oven a half hour before the rise was done. The top of the dough was dried quite a bit, so D slashed it in a few places to let it rise during cooking. He baked the loaf in our cast-iron Dutch oven for 40 minutes, removed the lid and cooked another 20 minutes. 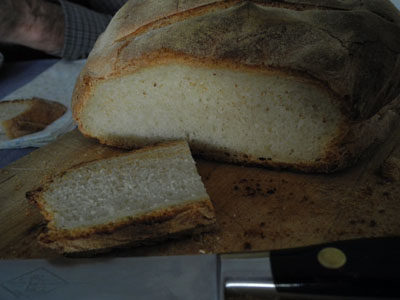 Having been kneaded before a 2-hour rise, and worked a bit not long before baking, the bread was of much finer grain than our usual (no-knead) bread.

D decided this would be a Christmas, and chose for Christmas wine a Barolo we got at Solano Cellars at their 5 Dec tasting event, where they were giving 15% off for case purchases. We enjoyed it quite well.

We brought lunch with us on our walk today since we were leaving rather late. D dug up our personal thermos containers and put Sorrel soup in them, and packed the garnish (more sorrel leaves, plus chives) separately so we could add them right before eating. Talk about style!

We also took pumpkin bolanyi and eggplant pesto, which I got at the Grand Lake farmers’ market yesterday. It is a great combination! D packed up carrots and radishes, and a slew of cherries for dessert. It was an outstanding lunch!