Pizza with artichokes, olives, sundried tomatoes, and arugula – 30 May 2012

We ran out of bread – always a potential pizza-moment – and I realized we had some of that strange, cheap, not brine-packed fresh mozzarella to use up – so we decided on this pizza.

It’s from The Edible Italian Garden. After prebaking the crust for 1 1/2 mins, brush (I spooned) with garlic oil (3 cloves garlic, minced, in 2 Tbsp oil), top with slices of fresh mozz (6-8 oz), then distribute artichoke hearts (I used Kirkland from Costco – not as acidic as some I’ve used but could still profit from rinsing), about 10 black olives, halved lengthwise

(I used up our Kalamatas and added in some Gaeta), and sundried tomatoes (calls for about 8 tomatoes – I used a passle of chunks from an oil-packed jar). I cooked this about 5 minutes, then removed and tossed 1 cup of baby wild arugula leaves over the top, and finally 1/2 cup of Stella medium Asiago. Baked another minute and served.

I wondered if adding prosciutto instead of the sundried tomatoes would be interesting. D says definitely rinse the vinegar off the artichokes.

I suggested the Volteo Tempranillo from Grocery Outlet, and D brought one up. We enjoyed it as “cooking wine” and with dinner. Great stuff 🙂

Later, we split the last cookie from the batch that R made on the 28th. Super cookies! 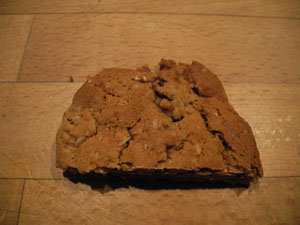