Sultan’s soup from the freezer; chard from the garden – 4 June 2012

A COLD day in June, with projected highs in the upper fifties both here and at my work. Ick. I thought I recalled seeing single-serving soup in the freezer, and dug out a one-person yellow split pea soup and a two-person Sultan’s. 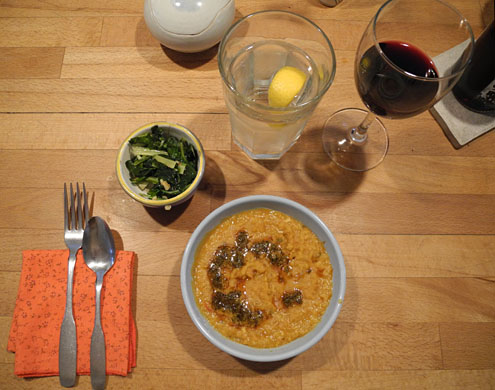 D didn’t want me to leave either for lunch (having other options) so I took the split pea to work and had the Sultan’s for dinner. I put it in the fridge before leaving this morning, but it was still icy and solid when I got home. I put it into a saucepan on low and just abandoned it for awhile, then later turned it over to heat the other side. By the time everything else was ready (chard; soup topping) the soup was piping hot.

I decided against cooking the beet roots tonight b/c I didn’t want to risk red spots on my tan sweater and was too lazy to change it. So I went out into the garden and cut off a few bolted stalks of chard and brought them in. It was a real chore removing leaves and washing them carefully, removing little black dots and white dots. One leaf had a significant white spider web on the back, and I went to remove it, only at the last moment noticing its large, 8-legged owner underneath. Tried to get the leaf outside before the spider bailed out, but failed. D opened the door and finally got the guy to get back on the leaf form time to time and also swished the leaf at him, and finally got him out the door. Some people just don’t know what’s good for them. So anyway, it wasn’t hard to remove the web then, and in fact the leaf cleaned up nicely, and even quickly. In the end, I had more than enough leaves, so there are plenty for another dinner. I chopped up a large clove of garlic, heated it in olive oil, threw in the few chopped stem bits I couldn’t bear to toss, and cooked till they wilted some. Then I tossed in the leaves, cooked, turning, till they wilted, and then added water and covered to steam. Salted almost at the last minute, but it was ok as I still had time to stir significantly. As I had expected, the chard was tender and fabulous.

I melted about 1 Tbsp of butter and added whatever I could dump out of the almost empty paprika jar – perhaps 3/4 tsp? – and also crumbled three dried mint leaves from previous years into it. Cooked a bit, mixed, and poured over the bowls of soup right before serving. D really liked the soup. I think he forgets how good it is or he would have been more enthusiastic in advance 🙂 Also had some more of the current loaf of no-knead bread.

We had leftover Two Mile Founder’s Rock and Delarouche Cotes du Rhone with this. Both good. The Two Mile is more opinionated and sort of individualistic, and also more delicious.