Posted on September 25, 2012 by berkeleybarb

I didn’t leave work till way after 7, and had to dream up a dinner I had not thought about at all. I called D to tell him I was on my way, and asked if we had anything dinnerish. Leftover meatballs was what I eventually latched onto. 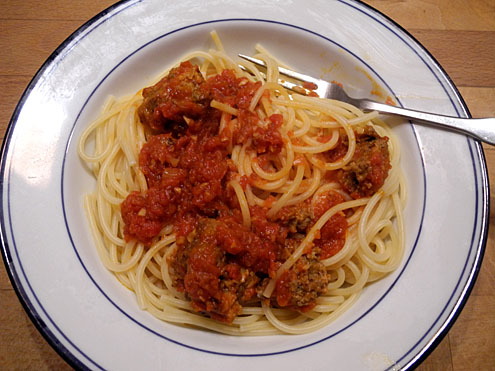 I took a container of Wells Sauce (Patricia Wells at Home in Provence – I think she just calls it tomato sauce) – 1 3/4 cups, it said on top – out of the freezer, gave it a boost to defrosting with 3 minutes on autodefrost in the microwave, and then just popped it out of the plastic container into a saucepan, and heated it to melt it. I took 4 of the lamb meatballs from Sunday, cut them in half, and tossed into the Wells sauce, and cooked it down for as long as the pasta cooked. This was enough for two servings of spaghetti, and one small lunch for me, with a bit of pasta, some sauce, and one cut up meatball. They were big meatballs, of course.

The sauce seemed to have taken up a lot of the spicy taste of the meatballs, and even if it hadn’t, they are strong-flavored, and would have predominated in the taste. 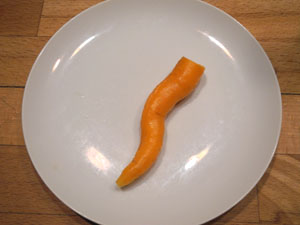 D also bought tomatoes and carrots at Dirty Girl Produce at the South Berkeley farmers’ market today. I washed two oddly bent little carrots and we each had one for our veggie. Such is getting home late. D also made a new no-knead bread today. I’d guess at 2 cups King Arthur bread flour, and 1/2 cup each King Arthur “white whole wheat” and Central Milling Company unbleached flour, but D said he also put in semolina. His measurements, he says, are always a little short, so he adds extra stuff. He also tossed in the remainder of the Grape Nuts from the most recent bag, which sprung a leak and leaked into a double plastic bag arrangement for a couple of weeks – so they were probably not all fines.

We had the leftover Ventoux from last night and Fatto a Mano from Sunday, and both were still very good. I thought I preferred the Fatto a Mano from the two leftover bottles, but a second taste of the Ventoux made me wonder if I was right.