Last July our friend M was visiting and grilled us some super good chicken thighs. I asked him how he had marinated them, and this is an approximation of that. 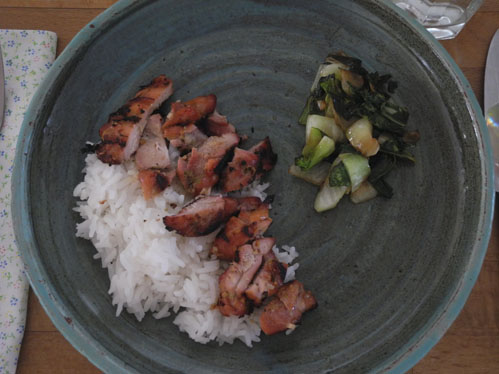 I cut up one stalk of lemon grass, after discarding a couple of outer layers and the stiff ends. I quartered the stalk lengthwise and then cut it crosswise as finely as I could stand to. I cut up some cilantro stems leftover from last night’s salad, and those made up perhaps 1 1/2 Tbsp (M used more like 1/4 cup). I also had a tiny bit of ginger drying out on the island, and decided it might as well go into the marinade, so I peeled and minced it, too. This was a piece perhaps the size of my finger, down as far as the nail covers. Maybe 1cc? (D said he could not taste ginger, and I got only one ovious taste of it.)

I added 1/2 tsp of sugar and tried to puree this with a pestle, but it’s not obvious this happened – still quite chunky. I minced two large cloves of garlic, and added those and pounded some more. Then I added about 1 1/2 Tbsp fish sauce and about 1 1/2 tsp soy sauce, mixed well, and added to the chicken thigh pieces that I had boned and skinned (and in the process, cut in half) this morning. This went in the fridge sometime between 3:15 and 3:30. I rotated the chicken pieces up and down, and flipped them over, a couple of times before grilling the chicken just before 7pm. I used the High heat setting on our Viking range grill, oiled the grill minimally using a brush, and cooked the chicken pieces 5 minutes on a side. This worked very well.

I cooked 2/3 cup Thai jasmine rice, and a moderate head of baby bok choi (in butter and oil, with S&P), and that was dinner, except: When M cooked this sort of chicken,

D made a dipping sauce from our Vietnamese cookbook. D thought the rice needed something tonight, so we pulled the remaining dressing (citrus, fish sauce, Fresno chile) out of the fridge and tried that. It was great! In fact, it is not so terribly different from the Vietnamese sauce D made last year.

D suggested we have a wine I bought on a trip to Mendocino last year, a Cesar Toqui Cellars Viognier (Sonoma County 2010). D had noted that the label suggested stir fry or spicy food, and given the contents of the marinade, he thought this wine would work well. He was right! We really enjoyed the wine by itself, as well as with dinner.

Lunch: We decided we wanted to try yesterday’s Acme Edible Schoolyard bread as toast, so we had fried eggs for lunch. D cooked a mediumish zucchini with diced red onions, and we had another 1/3 of the bottle of Brutocao zin that we opened yesterday. Great lunch!