This was a big experiment, which I went through with despite it being after a big event. Unfortunately, I am writing this on 1 July, but trying to remember it. The experiment was my first broiled pizza, a la James Lahey in My Pizza, which I ran out and bought at Black Oak books almost as soon as I heard of it. I mean time measured in minutes, there. The point is to get the hard-outside, soft-inside, slightly charred crust of a wood fired, 800 degree oven without having one. 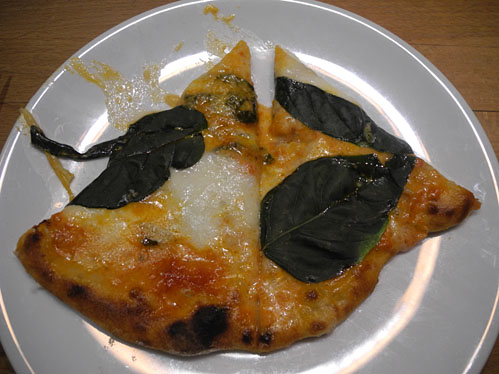 To do this, Lahey has you preheat the oven to 500 degrees with the pizza stone 8 inches from the broiler, then broil 10 minutes, then broil the pizza on the stone 3-4 minutes. I haven’t gotten it right yet, but it looks promising. 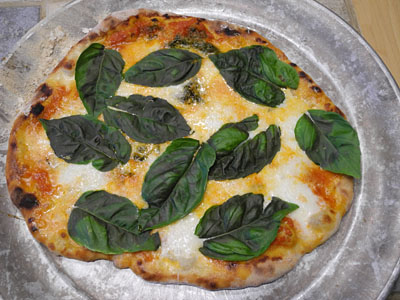 This first time as I recall, the dough was not risen on time and so I put it off for a day. It still was not great. I had made 1/2 recipe and put aside 1/2 of that in the fridge for a second try. I used some of my own Margherita sauce recipe (hard enough changing everything else – keep the sauce!) and I believe the fresh mozzarella from The Pasta Shop on Fourth St.

Couple of things: D worried about seeing the crust getting awfully brown, and wanted me to take out the pizza at 3 minutes. The crust was not done. I didn’t mind that but he did. I believe the crust has trouble cooking under thick cheese bits. Later, I have tried Lahey’s starter white pizza, which has less cheese on it, and I have tried broiling the crust 1 minute before loading the pizza, a technique that I think has potential.

Oh dear, I really don’t remember what we thought of this wine. I believe we’ve had it before, though – must be pretty good! We also can’t remember where we got it. It cost $12.97 (D has a photo of the back) and we’re guessing Berkeley Bowl.

We went to the Donkey & Goat wine tasting, and tasted their 5 “summer wines,” then chose their 2012 Grenache Noir, El Dorado for lunch. Lunch was one burger and one cheese steak, plus garlic(?) fries and truffled tater tots. from “510 Burger” food truck – good, but nothing to write home about. Except for the truffled tater tots, which we definitely have to try making. How hard can this be? Make TTs, sprinkle with truffle oil – which we have anyway b/c of the truffled egg toasts (see later this month and previous years). 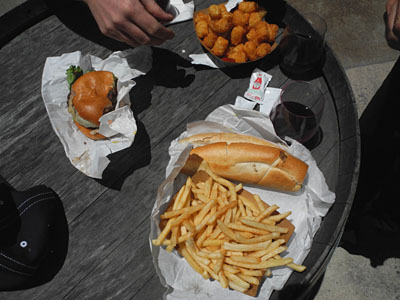