Posted on August 6, 2013 by berkeleybarb

SUMMER! It’s officially summer when Dirty Girl Produce brings their dry-farmed early girls to the farmers’ market 🙂 Today was the first day. I had planned, if the tomatoes were there, to make a tomato tart, but I got home too late to do that. (The crust dough must be refrigerated 1 1/2 hours or more, and then the tart bakes almost an hour.)  That was D’s mild preference, but the other alternative, a caprese, was not exactly anathema. 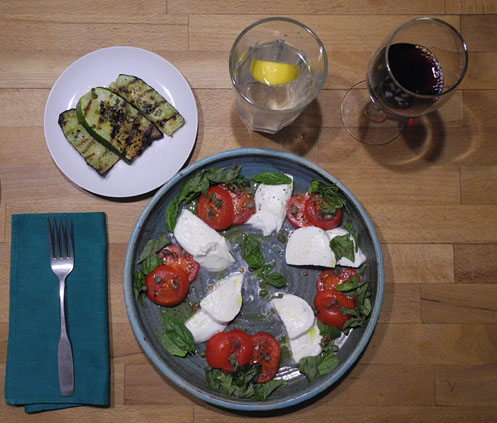 In anticipation of the arrival of Tomatoes (these get a capital T) I bought two balls of Gustosella mozzarella di bufala at the Cheese Board on Thursday, before they closed for their annual August vacation. I assumed I’d get the basil from the garden plants, but alas, they are pretty much done for the year. I got some, but since I was going to the Bowl for bread anyway, I bought a batch of nice basil and used a bit of it to fill out dinner (and placed the rest, washed, in water, after cutting off more than an inch of stem).

I looked at past blogs to find a good additional thing to have with this, but was not inspired (shell bean pasta can’t be made on the spot, and besides, we just had some) so just served some extra veggies. I used a favorite Saveur recipe as inspiration for some grilled zucchini. We had a 4″ or so hunk of a fat (not monster, just 2″ or so) zucchino, and I cut that into 5 lengthwise slices. I chopped a lot of the basil from the garden, mixed with some olive oil, and spread it generously on one side of the zucchini slices, leaving them on a plate in that condition.

Before cooking, I turned over the zucchini slices, coated them with the rest of the basil/oil, and salted them on one side. I grilled on high them with the salted side down first, though I doubt that made a difference; I covered them with the grill cover, and turned them from time to time. Don’t know how long they cooked, but I think it was longer than the expected 5 minutes.  The zucchini was delicious!

One carrot, but what a carrot! I got the last bunch that Dirty Girl had for sale, and it was a doozy – perfectly weirdly shaped carrots all ’round. This one was not terrific – a bit old, I think – but good enough, and certainly entertaining. 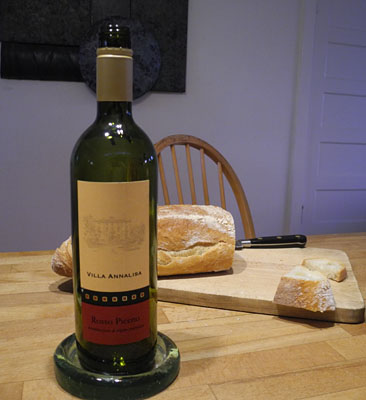 D brought up the last of the Rosso Piceno bottles from North Berkeley Wines’ 50% off sale, and we both enjoyed it. In the background is the Acme Sweet Batard I bought at the Bowl this evening. Very good bread. What a surprise…