Posted on January 7, 2014 by berkeleybarb

We’re in “using stuff up” mode, but trying to do it in good fashion. Tonight it was the rest of the mushrooms that we had around, before we acquired R’s extras that we had last night. I decided to saute them in olive oil and butter with a rosemary twig, and serve them with beef somehow. Ya just can’t make meat look so good in a photo, but it tasted just fine.

I decided the Somehow that was easiest was skirt steak. This is Angus beef – corn fed, says the meat department person from the Bowl. I will have to check if that is a good idea. I salted and peppered the pieces after trimming of a bit of extra fat, then turned them on their salted sides on the range grill, then salted and peppered the second sides and covered the grill. I cooked the fat ones about 6-7 minutes total, and the thinner ones more like 3-4 minutes.

We had about 7 humongous white mushrooms (and one teensy one – why?) and I cleaned all of these and sliced them a bit more then 1/8″ thick. I cooked them in a mixture of olive oil and butter, with a rosemary twig thrown in.

I boiled up 14 Brussels sprouts, trimmed, cleaned, peeled, and halved – the second to last servings from the discount bag I bought I think before New Year’s – in salted water, then drained them and added to a pan where I had cooked 1/2 piece of Berkeley Bowl applewood smoked bacon, cut into small bits. I salted the sprouts and cooked them with the bacon bits till time to serve – several minutes. 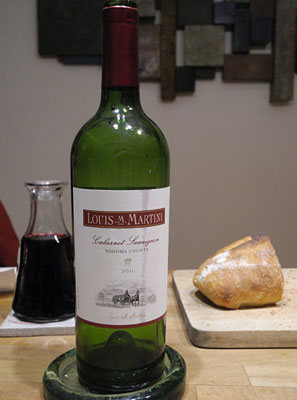 D, knowing this was a beef dinner, chose a cabernet sauvignon from Louis Martini, which we got at Costco recently for $11. It doesn’t taste particularly cabby to me, but it’s a tasty wine, which went well with the meal. I would like to get more bottles of this wine, and try leaving it open longer before dinner.

The Martini winery began in 1933, and is still in the family, with Louis’ grandson at the helm. Martini was one of the first wines we could actually afford in the Napa Valley, so they hold a special place in our hearts. I remember my late sister P buying a very nice Merlot, but choosing an older vintage, and saying “I’m willing to pay them $1.75 to age it for me for two years.” Of course, she was a doctor 😉 We took that wine to Yosemite, and had it in our cabin with a hearty meal, I believe spaghetti, after an exhausting but wonderful day of skiing. Good memories with this wine 🙂