D cooked his own version of a dinner we got recently out of La Cucina Italiana (in Italiano, Dec 2013 edition). 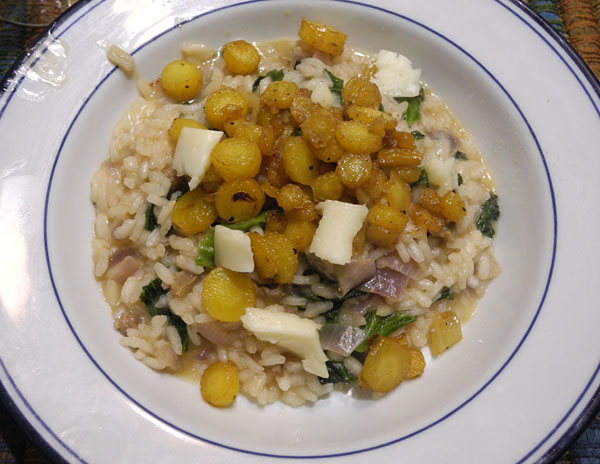 He bought taleggio at Berkeley Bowl, and used curly kale from the garden (small, easily-cooked leaves), and white carrots from Riverdog Farm at the Berkeley Saturday farmers’ market. He cleaned up the kale and carrots, and sliced the carrots thinly. He boiled the kale to get it almost done (about 5 minutes), and cooked the carrots in butter, slowly, for “as long as I was cooking” (he put them on first – perhaps 30 minutes?) salting and peppering at some point, then finished them with “a bunch” of white wine vinegar (in the rcp, it’s 2 Tbsp) and some sugar (a pinch, not the measuring-spoon kind). 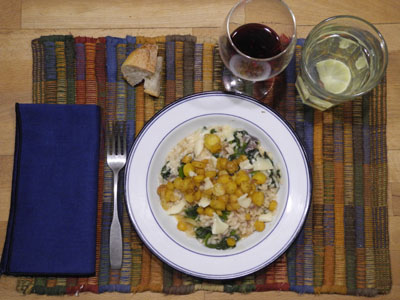 He cooked the carrots a couple of minutes after adding these – “boiling off the vinegar” he explains. He cooked 1 cup of arborio rice with onions and butter, then added bouillon-stock (Better than Bouillon – a random amount, to about a quart of water) mixed with a cup or so of beef broth that I had made when I cooked skirt steak, and cut off the fattier parts. He added chunks of taleggio from the Bowl “just about when I shut off the risotto.” He guesstimates he used about 3/4 of what he had, which would be about 1/4 lb. He also put some more on the top after serving. It was perfectly delicious! The vinegar was more prominent than last time, and I liked that a lot. Regarding the cheese, D says it was enough that you were convinced there would be some in each bite. He cut it into chunks and spread it around.

Friday: Friday wine. Cantina Zaccagnini Montepulciano d’Abruzzo which we get at Costco. Delicious 🙂 D also bought a new Acme Italian Batard today, which was of course excellent. We ate up the little bit of sourdough remaining before dinner – I found it was excellent with the small pieces of taleggio I kept sneaking. 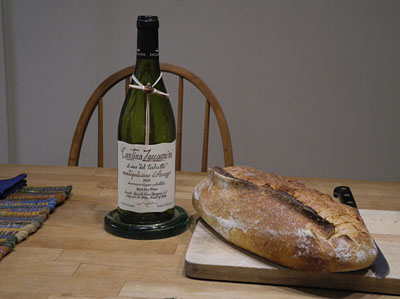 What sort of spellchecker tags “taleggio” but lets “guesstimate” by???

This entry was posted in Meat as a flavoring, Risotto and tagged Carrots, Costco, Kale, Montepulciano d'Abruzzo, Risotto, Taleggio. Bookmark the permalink.