D was weeding yesterday and accidentally pulled up a huge pile of Greek oregano. R said he should look for our pesto book, which D did not remember having (it had belonged to his late aunt, E).  I found the book, and D made the pesto, whose recipe suggested it should be served with chicken. 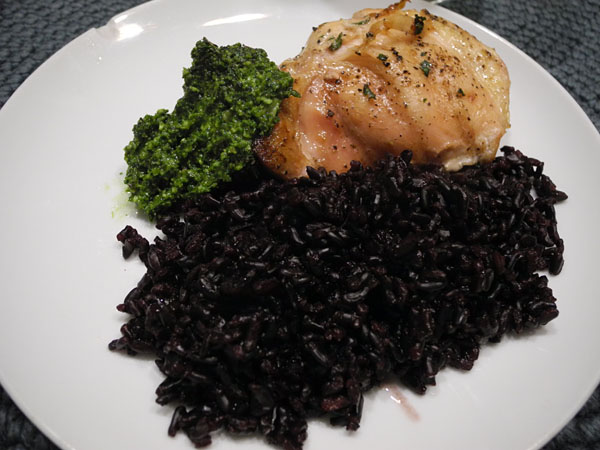 D began defrosting a packet of Costco chicken thighs, and, when I got home first and called him to mention that fact, he asked me to pull the chicken packet from the fridge and place it in cold water, so it would defrost completely.

He salted and peppered the chicken, and poured on some soy sauce, then some fresh parsley. He grilled the thighs, then served with the oregano pesto, which includes parsley and spinach as well as oregano, walnuts, and the obligatory garlic and parmaggiano. He cooked black rice, which I chose at Costco sometime in the last year; he thought it was not a great match as far as taste is

concerned (the chicken and pesto were!) but the texture is great. Besides, it looks cool. Finally, D made a salad of romaine, the remaining young spinach leaves, and celery, and a dressing of olive oil, red wine vinegar, and a bit of the oregano pesto.

D chose a Chianti we got from The Wine Mine, a 2010 Cetamura, which also says “Coltibuono; Gaiole in Ch. – Siena – Italia.” It’s 100% Sangiovese, and quite enjoyable. D is not sure we tasted this one – might just have bought it b/c it was only $9 and we wanted to try it. Finally, we had a slice of the very beautiful and tasty Acme Whole Wheat Walnut bread. 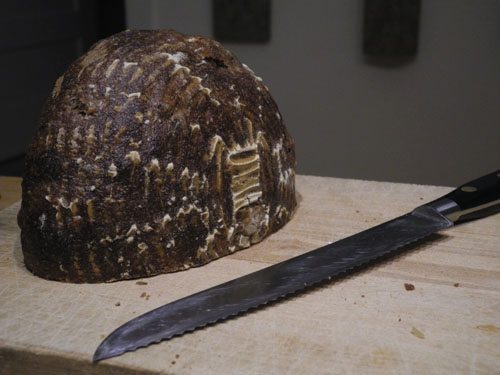 Later, we also had cookies – R made sugar cookies and provided us with some. I snapped 4 of them into an airtight container to enjoy on another day.