Posted on November 7, 2014 by berkeleybarb 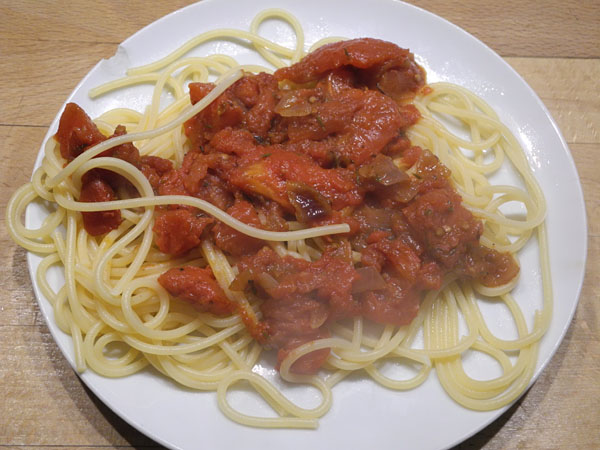 D bought a bag of bargain tomatoes sometime… probably Monday or Tuesday… and had set them in boiling water for a minute or two to loosen their skins. They’ve been sitting in the fridge in a bowl since, but he was working at home today so had a chance to cook up onions and garlic, and peel and chop the potatoes and start them cooking. He added oregano and thyme from the garden and let them simmer awhile, then turned off, and started them up again at dinner time. They needed some salt, and we added grated parmaggiano at the table, but otherwise it was a very tasty sauce. The rest is in the fridge, and I’m sure D will make more variants from it, and freeze a portion for later use.

D also bought more of the buffalo gorgonzola that goes so wonderfully with out tree’s apples, so that was the dessert, which also included the protein for the meal. Delicious combination! Hm.   I think I neglected to photograph that… Ah, also a new Acme Italian Batard.

We had the leftover Caminetto winse – a Toscana Rosso and a Chianti – and both had survived well, though we really didn’t know which was which.