I suggested we remove a partial skirt steak from the freezer that I had seen on a previous foray into the lower bin, and use it for dinner tonight. Turned out to be only from this August, probably when our friend R was here for dinner. The steak weighed only about 6 oz, so I made about 1/5 of this recipe of marinade, and in fact, that was quite generous for the steak we had. This is from Weber’s Real Grilling.

Marinate in the fridge for an hour (was more like 1 1/2 hours) and grill on direct high heat 4-6 mins [more like 2 mins, b/c this was the very thinnest part of the skirt steak].

I also rubbed a bit of olive oil into four lengthwise slices of a med-small zucchini and grilled it (longer than the steak), and roasted a poblano for tomorrow while I was at it. Or for the next day – we haven’t figured that out yet, actually. Meanwhile: cleaned and cut into maybe 1/2″ to 3/4″ dice two medium Yukon Gold potatoes, and boiled what must have ended up being 15 minutes. D drained them while I took a shower, and then I returned them to the dryish pan with perhaps 1 Tbsp butter, salted them, and heated on low till everything was done, then mixed in two hefty sprigs worth of parsley, chopped. 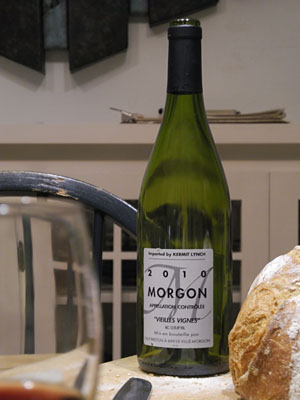 Everything was great, and the meat and potatoes went especially well together. Actually, the zucchino was not terrific – maybe could have used that basil marinade from Saveur. but it was good. Had a bit more of the Acme Sweet Batard, pretty much just to polish the plates.

D chose a wine we got 3 years ago at Solano Cellars, a Morgon priced at $32, but 15% off. It was much lighter than he expected or than I would have expected, and pleasant, but not necessarily the right meal to set it off. I think my Boudin Blanc pasta would be great, but with Christopher Lee in New York, Boudin is not to be had around here – at least not in Christopher Lee quality 😦

I didn’t write this down but I like the picture, with D grabbing some cheese (probably the Grottone) and some leftover spaghetti, a tangerine.