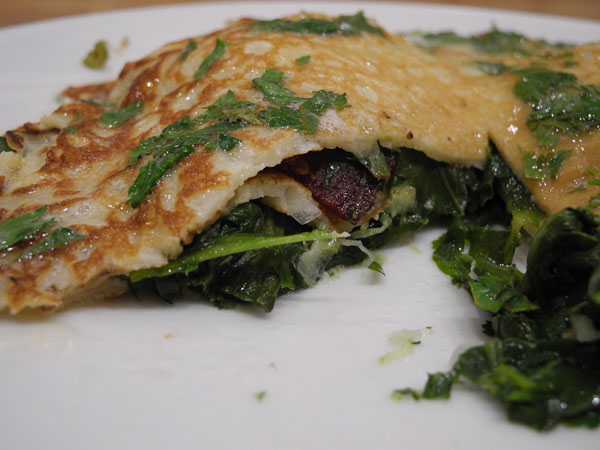 I’ve been waiting to make this for weeks. Finally found a time when nothing else was scheduled, when there was no bread, and before the bacon went bad. Amazing. D helped cook this, which made it ge much faster, b/c there are multiple threads that come together if two people do it; otherwise, everything is done sequentially, which takes about 2 hours. 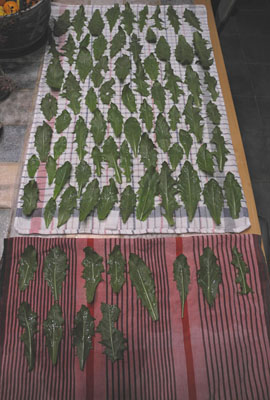 Of course, that includes picking, cleaning, and stemming the dandelion greens, which I did earlier in the afternoon. Except they were little ones, so I tried not stemming them this time, and that worked just fine. I picked 6 dozen leaves from the plants in the front yard, and this was actually slightly too little, though it was ok. We cooked up two entire bacon slabs (thick cut, Niman Ranch applewood smoked, dry-cured bacon) per person, so four pieces, each cut in half, so four halves per person. D sliced the scallions and cut up the parsley (which I had also brought in and washed earlier), juiced half a lemon, and melted the two pieces of butter required, and then also babysat the bacon after I got it started. I mixed the batter for the pancakes and cooked them, after getting the bacon started, and babysat the second butter melting episode.

The recipe is from Georgeanne Brennan’s Potager, which is unequivocally recommended. 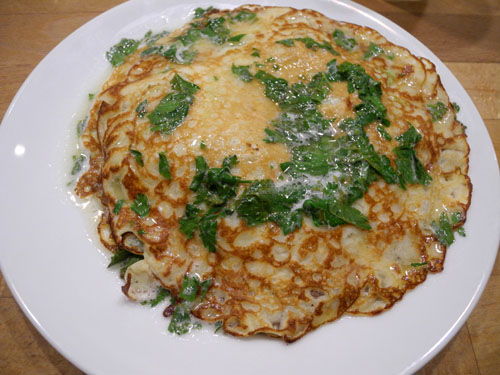 Wash, stem if necessary, a pile of dandelion greens. Thinly slice 1/4 cup scallions. Wash, dry, and chop finely 2 Tbsp parsley. Juice 1/2 lemon. When close to cooking time, melt 1 1/2 Tbsp butter in a small pan and let it cool, prior to mixing the batter. Preheat an oven to keep plates and pancakes warm.

Mix 1/2 cup + 1 Tbsp milk, 1 egg, and 1 Tbsp butter that has been melted and allowed to cool before adding; mix 1/2 cup flour 1 1/4 tsp baking powder, and 1/4 tsp salt in a bowl, then add the flour mixture; add 1/4 cup thinly sliced scallions. Scoop by 1/4 cupfuls into a heated, oiled (I use peanut) medium frying pan (8″?) and cook till bubbles form, then flip and cook the other side a bit. Takes maybe 4 minutes or so per pancake. Place on a plate in the warm oven. I think my pancakes were a shade thin this time, but still fine.

Cut 4 pieces thick-cut bacon or more pieces (6?) normal-cut bacon in half, and cook carefully till perfectly done. Can put this in the oven to keep warm if desired.

Steam the dandelion greens about 4 minutes – start the water this after cooking 2 or 3 of the pancakes, so as to finish close to when the pancakes do. We just left the pan closed, and the greens stayed pretty warm for a few minutes.

Finally, melt 3 Tbsp butter, mix in the parsley and the lemon juice. Ideally, you finish the pancakes right about now.

When everyone is seated and ready to eat, remove the warm serving plates and pancakes from the oven. Place one pancake on each plate, top with two bacon pieces and 1/4 of the greens each. Place another pancake on top, top with the remaining bacon and greens. Lay on the final pancake and pour lemon-parsley butter over the top. Serve immediately.

We also had green beans with this, which D but up and boiled for 5 minutes (we decided it should have been 4) and cooked with I think butter and the overrun of the scallion slicing episode. Good veggie. 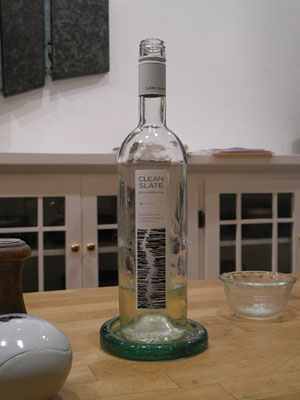 We had a German Riesling in the fridge – Clean Slate 2013 Riesling – and online multiple  people said it was not sweet. It was slightly sweet, but went ok with the meal. OK, it was not sweet like a dessert wine or anything, but the sweetness was definitely there – not in residual sugar, just in taste. I have no idea what words one uses here. We did like this wine quite well – got it at the Bowl for $11 last month.