Well, for a day full of leftovers, this post sure has a lot of pictures! I’m composing this 20150616 b/c I didn’t create a draft back in January, 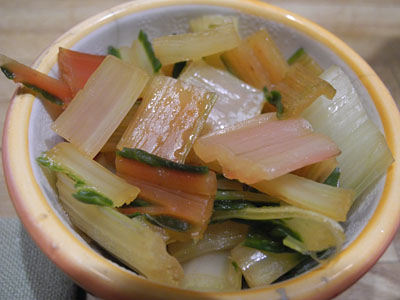 but I remember enough (prodded by photos) to sort it out. Clearly, we had leftover cinghiale/ olives! And served over what was likely leftover rice. Also cooked up some stems of rainbow chard (which AFAICT means “we picked stems from different colored plants and bunched them together”) that I cut and cleaned on the 13th, when I cooked their leaves.

They’re much prettier before they’re cooked, however! 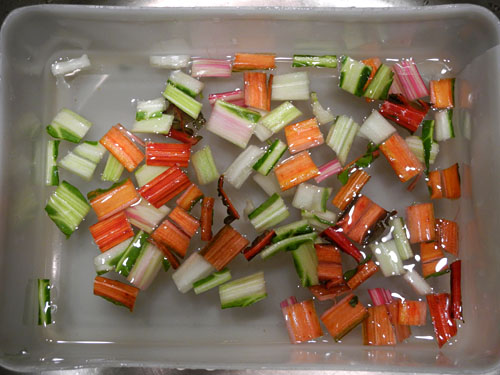 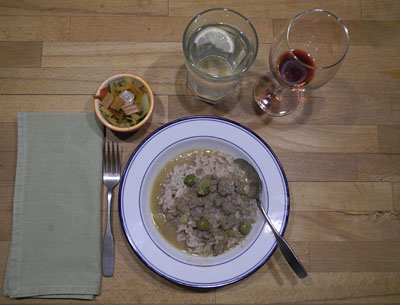 Had our wonderful Domaine la Milliere Vin de Pays Vaucluse from North Berkeley Wines. Then D brought dessert – probably was the last of the poteca I brought home from Mom’s. 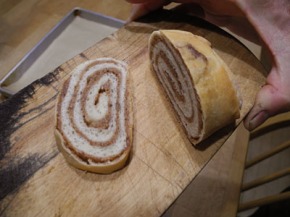 …was leftovers, too. We left the soup out overnight – oops. D insisted that with all those peppers, and it having been cold overnight, we should just heat it up and eat it, which we did to no ill effect. 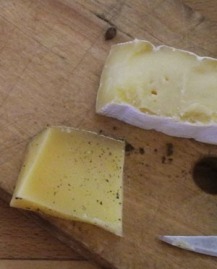 We still owe R&E some soup, however, since they love it and we ate up the end! I see we also had a tiny bit of leftover crespelle di ceci, and for a bit of protein, some cheeses. I like the napkin with the soup 🙂

D opened a bottle of our Tariquet Cotes de Gascogne to have with this.

Last but not least…

E makes these delightful Christmas cookies every year, but rolling them is a major effort, so she brought over the dough this time, and all four of us got into the rolling act. Then we feasted on them! R’s excellent eggnog was an outstanding accompaniment.