This is a pizza from a book from the late NY restaurant ‘ino, which we loved. Never had the pizza there, though. I made this at least once before. Here is tonight’s version, with suggestions for improvement.

Bake the crust 500 degrees on the stone for 1 1/2 minutes, and remove to relatively flour-free board.

Top with slices of fresh mozzarella di bufala, in this case Gustosella.

I used 1 1/2 balls of cheese this time. 2 would be ok. I sliced the balls in half, and then cut them at 90 degrees to that cut into slices, and drained them for more than an hour before adding to the pizza.

Tear or cut up 2 thick or 3 thin slices of prosciutto, and arrange over the cheese. Grind pepper over the lot.

I was ready with 3 thick torn slices (previously I said I used 4 slices) but didn’t use them all, and I think there was plenty. 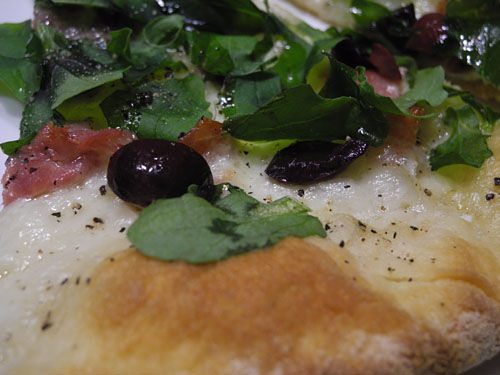 I cut 12 Gaeta into quarters, then read my previous admonition that quarters were too big, so I went back and cut larger pieces into smaller ones. I think I would try only 8 or 9 olives next time, to see if that cuts back on the salt content, which is considerable. 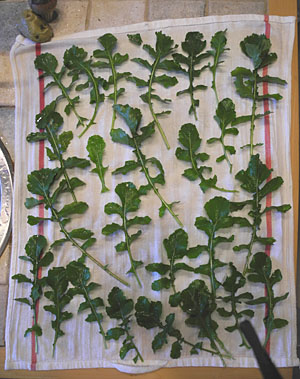 Top with fresh arugula, grind pepper over the top, and drizzle with fragrant olive oil.

I used volunteer arugula from the garden, which was near the path and therefore vulnerable. The stems were perhaps 7 – 8″ long. I washed a pile of them before work, and left them in a plastic bag (well reused) in the fridge till I had time to pull off the leaves while the pizza cooked. I ended up using a dozen or so on the pizza, which was a fine amount. A bit less would also be ok.

D was happy with the pizza (always sounds a bit surprised when he says “It’s good!“) so I’m putting this one down as a Very Good Pizza.

D suggested (backhandedly – he asked if he should open it) having this wine for dinner. Not Friday Wine?? But that’s ok, we get a lot of Friday Wine. We got a Barbazzale at The Wine Mine at a tasting, and when we drank it, we decided it wanted to be aired for several hours. I bought another, and D brought that one up and opened it with too little time to air. This time, the wine was opened at 2pm, and I definitely think it wanted that. It was really good. The denominazione is “Etna” and the grapes are grown in volcanic ash. Doesn’t say which grapes. Unfortunately, this bottle was on sale as an “orphan” wine at Wine Mine, so there aren’t any more that we know the location of. It’s not so great that we would run off in search of it, but it’s a nice wine and I’m glad I bought this last bottle.

1 Response to Pizza with prosciutto, arugula and olives, with mozzarella di bufala – 23 January 2015