Hey, this worked! About 5 o’clock I wondered if D had any ideas for dinner, and thought of offering to make a pizza. I texted him, and he wrote back that since we had no bread to have with dinner, sure, a pizza would be great. So I did as rapid a defrost (setting the frozen dough container in warm water in a covered pan) as I could, and texted him again – asparagus? D bought a bunch of asparagus for the truffled egg toasts, and we have not yet used up the extras. He thought that would be fine. I looked up the asparagus pizza we had at Pizza Moda on 13 May, and fortunately I had noted what it apparently said on the menu regarding the ingredients: garlic butter, scallions, mozzarella, and red pepper flakes. We have a plan!

I took about 8 stalks of asparagus of moderate thickness, broke off their tough bases, washed them, and boiled them in salted water for 2 minutes. Then I drained them and covered with cold tap water for a few minutes before draining again in a colander and letting them dry on a towel. Later, cut off the tips and cut the stems into 3 or 4 thin slices lengthwise, and the crosswise into 2 or 3 pieces so as to be bite-sized.

I sliced maybe six or so scallions [Secret ingredient! This taste is so excellent!] into thin rounds and cooked them over medium heat in 2 Tbsp butter, along with one minced garlic clove (a small one) and 1/8 tsp red pepper flakes (could use more – I lowballed it this time). I grated about 5 oz part-skim mozzarella.

After precooking the crust 1 1/2 minutes, I spread the scallion/butter/garlic/red pepper flake mix over the crust, then sprinkled on about 2/3 or more of the mozzarella, then the a 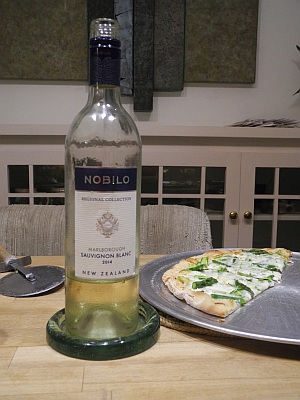 sparagus stem pieces, the rest of the cheese, and then the asparagus tips. I cooked this another 5 minutes or so, and that was it. It was quite good, and not at all a bad match to the one we had at Moda, though their crust was better, I think. Yay! D asked about the lemon and was surprised there wasn’t any – and suggested that adding some would not be a bad idea, so we can consider that for next time.

I found a bottle of Nobilo in the fridge and decided that would be good with the pizza. It was good, not perfect, but IMO a white is right with this pizza. D was assuming a red, interestingly enough, so I suppose we should also try that sometime. 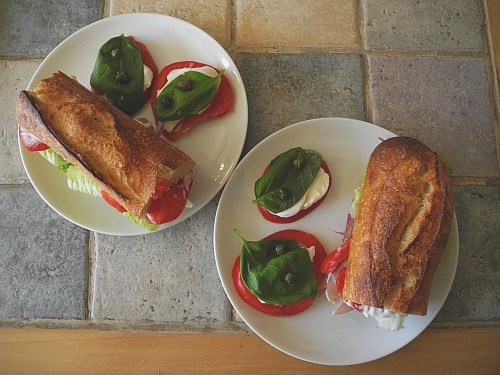 I’m adding this 170415 (!) so as to be sure the pizza recipe is on the blog. This lunch looks pretty, and clearly involves sandwiches on a baguette – undoubtedly Acme, probably Rustic (based on the cuts in the top) – with prosciutto, lettuce, tomatoes, and mayonnaise. Tomatoes are likely Dirty Girl Produce early girls, which sometimes are available this late. I see I have used up some tomatoes and fresh mozzarella, with basil leaves and perhaps capers on top, on the side of the sandwiches.