Pappardelle with radicchio and bacon – 10 December 2016 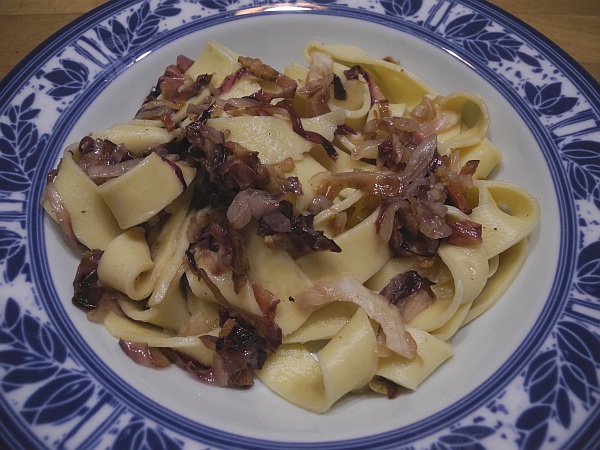 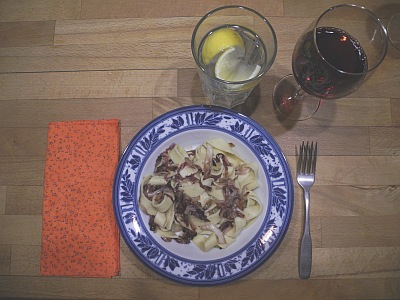 Going for as many radicchio recipes as possible to use up the three heads of radicchio that D bought last week in a discount bag for 89 cents/lb. R&E happily took one of the heads, and we are coming close to using up the other two. This is a favorite pasta of mine. I described it pretty well here. I see I forgot this time that it should have grated parmaggiano over the top.

I used less than half of the largish head of radicchio, perhaps 1/3 of a medium onion, and two complete slices of frozen Niman Ranch apple smoked bacon from the freezer, cut into matchsticks.

I bought a bottle of McIlroy Pinot Noir (Lila Lane Vineyard, Sonoma Coast, 2014) at Costco and we decided to try it with this meal (I’ll admit I had that in mind when I bought it). D thought it had a bitterness to it, which I didn’t agree with. He thought it went pretty well with the bitterness of the radicchio, but was not a fan overall. I liked it a lot, and found it light and delicate.

We had a chunk of R’s version of Mom’s fruitcake for dessert. 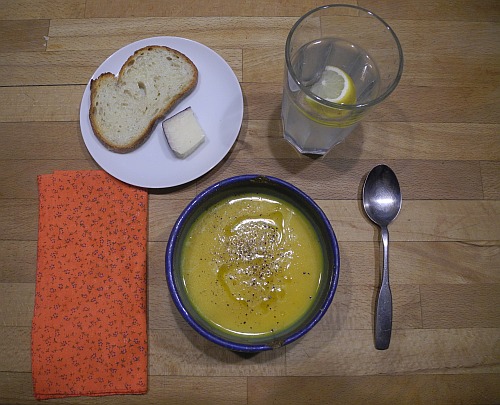 We ate up the last of the butternut squash soup, varying it this time by drizzling with a bit of olive oil, and topping with a lot of pepper. Again, we each had a chunk of Merlot Bellavitano, and this was the last of it. Defrosted slices of Acme Italian bread, toasted. No wine, despite its being a Saturday.