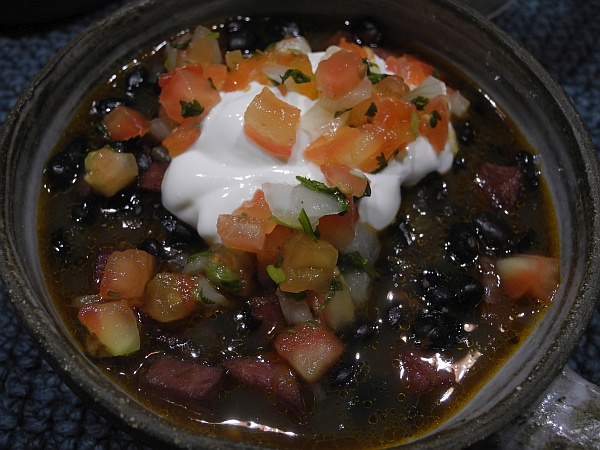 Rainy and cold, so I suggested we make a soup. 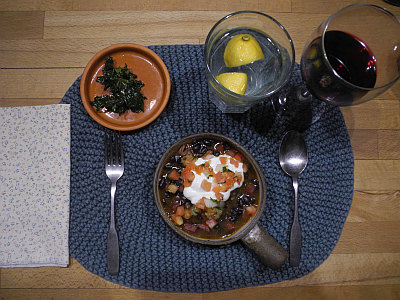 We had planned on nachos soon, so buying salsa and sour cream worked for both that and this soup. I made the soup, changing only a couple things from the recipe. I used half a hunk of applewood smoked ham from Niman Ranch (uncured), cut in rather large dice, and half a packet of bacon, also Niman Ranch, as bought at Costco. They include 9 thick-cut slices in a packet, and I cut those in half before freezing, so I used 4.5 slices of thick-cut bacon for this recipe. except that there was a lot on this batch that was pure fat, and so I took out what was surely more than a half-slice and tossed it (melted a small bit first to create a bit of fat to cook the rest, then removed the entirely-fatty bits). So that was all fine – the soup tasted great. 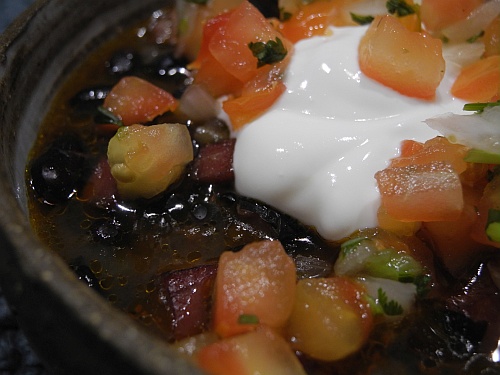 Here is a previous rendition: https://adinnerjournal.wordpress.com/2014/12/18/common-grill-black-bean-soup-brussels-sprouts-18-december-2014/

I cut leaves from our small, resuscitated kale plant, and these are the type I see included raw in salads, so I decided to try just sauteeing them rather than boiling, thinking they would not be inedible that way. After a bit, I decided to add some water and cover to steam them a bit, though. The frying pan (cast iron) I think added a weird taste, unfortunately. 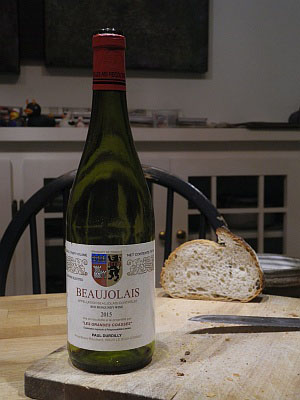 D chose a bottle of the 2015 Beaujolais we got when North Berkeley Wines was selling them for $9. It was a good meal to have this with. Recipe notes in the Common Grill cookbook say that Brother Thelonius abbey-type (thanks, D) ale is great with it – we’ll possibly have R&E over for lunch and serve more soup with Bro Thel. D pulled a four-slice-sized chunk of Acme Italian Batard out of the freezer earlier and we had two of the slices for dinner and cut the last bit and refroze for a future sandwich or toasts.

You can see why we call it “bunny bread”. 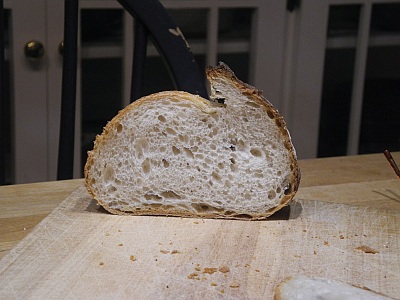 D defrosted two lengths of the Acme Sweet Rustic Baguette and made sandwiches using the rest of the Fromager d’Affinois brie from yesterday’s lunch, some romaine, a slice of almost tasteless tomato (liked the bites without tomato better, as it turned out), and some mayonnaise. We had Brussels sprouts with butter, a kosher dill pckle, and some celery. Nice lunch 🙂 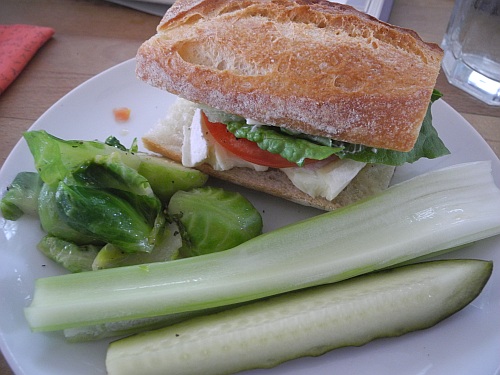