I made a list of stuff we need to use up before it goes bad, and this recipe used fully four of those ingredients (but didn’t use any of them up completely, alas). I made fresh pasta, six sheets as usual, and cut up four of them into quadrucci – cutting into perhaps 3/4″ strips, then cutting crosswise into approximately squares. I rolled the strips to a 6 b/c I rolled the first one that thin by not paying attention. Would have been better to re-roll to a 5, or possibly even a 4. Also, cooked in boiling water 2 minutes, which for this thickness – thinness – should have been just one minute. Even with substantial cold water wash, the little squares stuck together a bit, though the melted butter from the onions (below) helped separate them somewhat. But 2 mins for thicker pasta makes sense. OK, second mistake is that, since I was not using the recipe from the cookbook (Teubner et al., The Pasta Bible) for the pasta, I guessed how much to mix with the ham and

prosciutto, and guessed wrong IMO. Using half the recipe (Paul Bertolli: 1 cup flour, one large egg) would have worked better. So for the future: make Bertolli recipe, cut half for this dinner, reserve the other half. So I have 1/3 of the recipe now, cut into fettucine for a future lunch, most likely, which may end up with the stalks of my hen of the woods mushrooms on it.

Cut up into small pieces 1/6 lb fully cooked ham (leftover Niman Ranch, from ***), 0.7 oz (one slice, as it turns out this time) of prosciutto. Cook about 2 Tbsp onion, minced, to translucency in about 1/2 Tbsp butter. Mix meat and onion (and butter) with cooked pasta. I used my hands, needing to skoodge the pasta bits apart as much as possible (should be better with thicker pasta, as above). Separately whisk one egg, 1/6 cup sour cream, 1/6 cup milk 1/3 tsp salt, and some pepper (don’t recall how much it wanted and I didn’t measure anyway). I separated the pasta mixture into two buttered, personal-sized casseroles (which I got ages ago from our neighbors C&S at their yard sale) and poured the egg mixture over them, put a making sheet on the lower shelf of the oven and cooked 30 minutes at 400 degrees.

Basted, per the recipe, with a bit of melted butter when they looked a bit dry near the end. I left these in the turned-off oven while waiting for D to come in from his painting and/or wallpiece-packing project, and cooked the beans (steam 4 minutes, reheat in a bit of butter, salting). Chives go over the pasta just before serving. The pasta was good, but not as delicious as I remembered it, possibly because of the too-thin and too-much pasta.

D chose a “tester” Cotes du Rhone we’d gotten a week and a half ago at Wine Mine, and we both really liked it a lot. I think it was happier late in the meal than it was earlier, so perhaps opening a half hour before dinner would be good. We’re hoping they still have some so we can get a case. 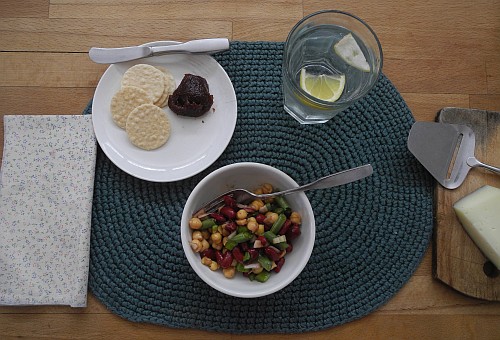 We had some of D’s bean salad, with uncooked green beans, and canned kidney and garbanzo beans. I suggested we eat up the Manchego in the fridge (from Costco) on crackers (Sesmark Rice Crackers) topped with some nice fig spread I got at a tasting at the Bowl. (“Orchard Choice California Fig Spread, Mission Figs”) Nice lunch 🙂