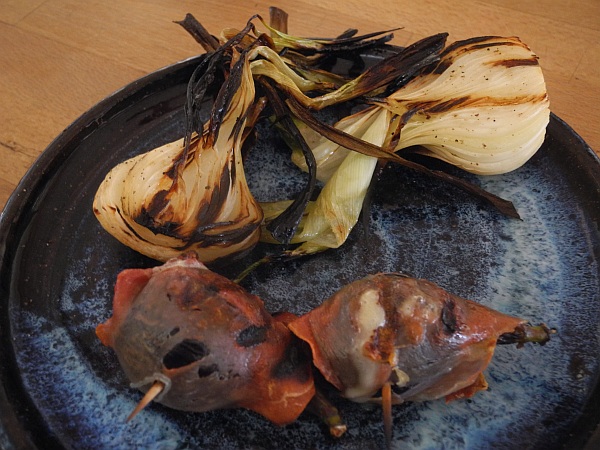 So, D is on a very useful kick of trying to empty the fridge of stuff that is outdated or otherwise gone bad. We figured out a couple of things to have, and he went to the Bowl and bought, along with the short list on the chalk board, an Acme Sweet Rustic Baguette to spread stuff on. 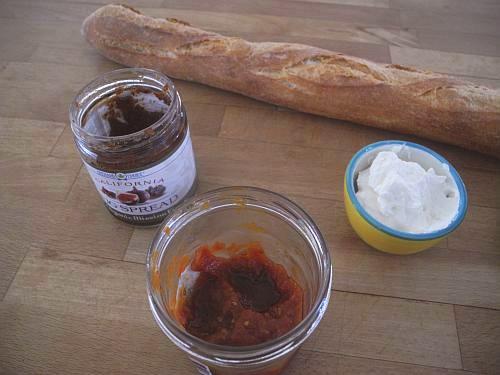 He opened the ricotta container and found blue stuff around the top, and a couple of dots on the cheese below. I scooped out a lot of cheese and dumped it in the city compost collection (a milk carton – also compostable here) and put the rest in one of our little bowls for dinner. D pulled out a jar of fig spread that I bought awhile ago at the Bowl after tasting it – seriously figgy! [Orchard Choice California Fig Spread, made with California Mission figs] – and a neat spiced tomato jam that E made in September. Later, he went back to the fridge for the ancient guava spread, and the tiny bit remaining in a jar of ginger spread by “Ginger People.” The ginger was too hard to cut into, so he is leaving it on the table overnight to see if it softens up. There’s not much left. 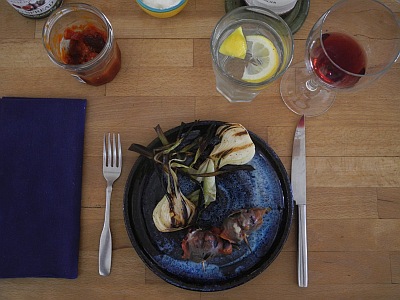 The figs he bought at the Bowl a couple of days ago were not happy figs –  unripe, and too early in the season – so we decided to see if they would be better cooked. I noted that there were two slices of prosciutto from Trader Joe’s left that we could wrap around the figs; and D suggested stuffing the figs with Cambozola (Wikipedia: “Cambozola is a cow’s milk cheese that is a combination in style of a French soft-ripened triple cream cheese and Italian Gorgonzola.”). I was loathe to do that b/c the cambo was so yummy by itself, but in fact, I used up very little of it stuffing four figs. I grilled the figs on medium, covered, 3 minutes on the first side, 2 on the second, and they were great. D started the grill and cooked the spring onions, olive oil coated, for something more than 5 minutes – as much as ten? – on the first side, and probably 5 on the second, while I added in the figs to the grill, so they’d finish about the same time. The figs were great! Really enjoyed them this way. We have done this plenty of times, but normally used quite ripe and happy figs. This was a good way to recover the premature ones. Onions also really good, as we learned from the previous two on Saturday. We got the fig idea having such a dish at the late Bistro Viola on San Pablo Ave, many, many years ago. 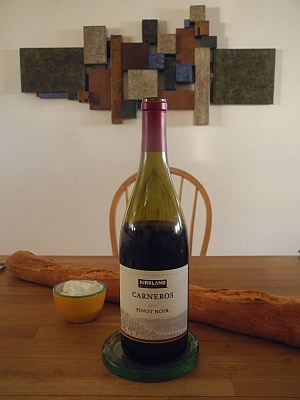 thought the ricotta was delicious just spread on the baguette, but it also went well with a bit of fig jam added to it, or even a bit of the spiced tomato jam. I tried the tomato jam with the onion, but it wasn’t a great match.

We also tried the Costco (Kirkland) 2015 Carneros Pinot Noir that I bought last week. It was $9.99, so not expecting a fabulous wine, and didn’t get one. It had some good flavors there, but I didn’t like it enough to buy again.

We also had an Acme baguette for lunch, but this time it was two defrosted pieces of sourdough, which I made into sandwiches, using up the last of the Danke cheese, some romaine, and thin slices of that vast tomato from a previous diary. Mayo on both, seedy mustard on D’s. 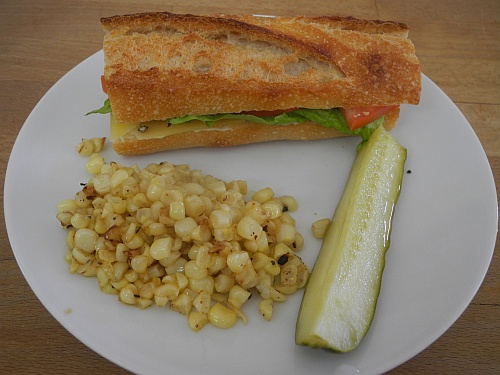 He bought an ear of corn when he went to the Bowl, and I suggested this would be a good time for it, about the same time he was discovering it in the fridge drawer and saying the same thing. He cut the kernels off and cooked them in butter with salt and pepper, but also he did this in the pan in which the carrots, with sweetened butter and oil, were reheated last night. It was really good, though D thinks he prefers the corn cooked just in olive oil, rather than in butter. Also a most excellent Clausen dill pickle. That was easy 🙂