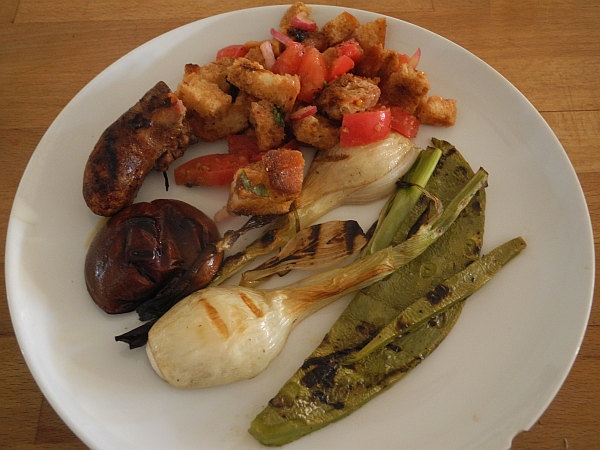 This dinner had a complicated history, and ended up sorta one-off in a couple of places from where it began. I wanted to make a panzanella recipe from Weber’s Real Grilling, which has grilled bread and grilled eggplant in it – eggplant being an unusual ingredient. Also, it’s more usual to have a red wine vinaigrette, but this one has balsamic instead. So, D decided we should have a more traditional (bread, tomatoes, onion, basil) version, leaving out the eggplant. This after we’d bought both long and little egg-shaped eggplants at the Berkeley farmers’ market. We’d also bought more of the nice spring onions from Happy Boy that D enjoyed grilling, so what we ended up with was one little round eggplant, halved, oiled, and grilled; one green onion each, split, oiled and grilled; panzanella using up a pile of the older breads from the freezer, also grilled; and, in

deference to my desire to have some actual protein, one grilled Christopher Lee Calabrian sausage (Pork, Calabrian peppers, fennel seeds, garlic) for the two of us. (It turned out to be somewhat freezer burned, alas, but not surprisingly as we bought a lot when Christopher Lee was leaving for a long consultancy on the other side of the Atlantic.) And then I had to go to the Bowl to see what sort of pre-season tomatoes might be edible at this point. Bought some tiny odorikos, but they weren’t, afaik, from Miyashita, and they had little tomatoey flavor. Bought four “stem” ones and those we have not tasted. D is for some reason into the moistness of tomatoes on sandwiches this year, despite their lack of taste. Anyway, while there – actually, when I was standing in line – I got a text from D suggesting I look for purslane/portulaca, which 1) was in an online tomatoless panzanella video (in Italiano), and also 2) is said by something-online-probably-Wikipedia to be considered a weed in the US, though used as an herb/salad ingredient in Italy. Bowl didn’t have it, but while looking I found some Nopales, already de-fanged, and bought some on a whim, based on the rec last week in the What’s For Dinner series. So D painted that with oil, salted and peppered it, and put it on the grill, too. I was not entranced, but it was fine. Apparently full of good-for-you stuff, too. I see the lunch lime bits ended up in the dinner water 🙂 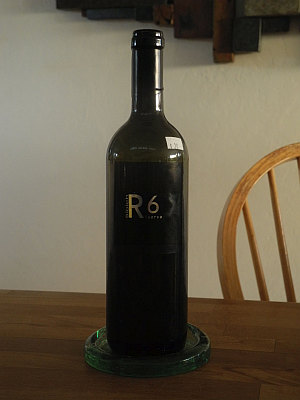 Knowing we were going to make panzanella for dinner, I suggested that we buy one of the wines from today’s Wine Mine tasting to have with dinner (among others we bought for random uses). This tasting was pretty much Adriatic, and we bought a couple of liter bottles of a Slovenian white. Tonight’s wine was “Bibich Riserva 6” – grapes babich, plavinia, lasin, which are “native to Dalmatia on Croatian coast of the Adriatic sea.” Clearly written by a native speaker of a Slavic language 🙂 It was good with the meal, and especially went well with the panzanella – some real synergy there – but probably not going to be bought again since it’s $20 and not mind-blowing. But maybe one or two if we’re making panzanella again. 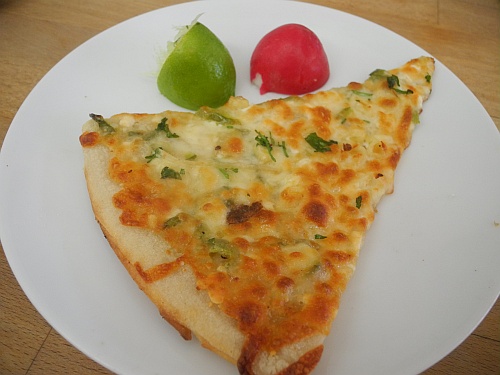 D sweetly went along with my suggestion that we drop in to Cheese Board after our farmers’ market and Post Office visits, buy a couple of cheeses (Fontina Valle d’Aosta, Roquefort), and indulge in a half light-bake pizza for lunch. The pizza was “pasilla” peppers (possibly actually poblanos?) and corn. I didn’t write down all the ingredients, unfortunately. Ooo, I think the green bits are cilantro. There was a half lime in the box, and we squeezed that onto the pizza after cooking at 400 in the toaster oven. This time, the crust didn’t really cook that well, and I wonder if the pizza was too “lightly” baked in the first step. Tasted good, though. D got out a radish from the farmers’ market (Happy Boy) to have on the side. We were about to run off to Wine Mine for their Saturday tasting, so did not have any wine for this weekend lunch.