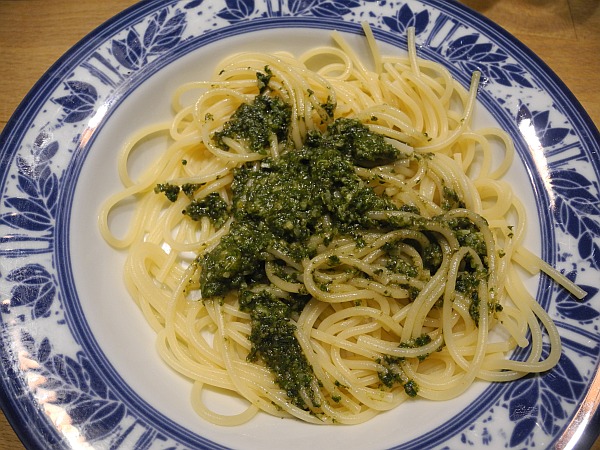 Home again, and eating up what needs to be eaten. First, it’s past the time our basil should have been killed by the weather, so we decided to pull all the plants (one bin, a mature set of stems sold for growing inside but we plant them) and make pesto. 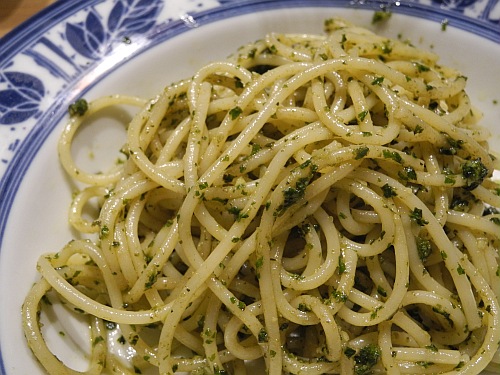 You have to mix it first, then eat 🙂 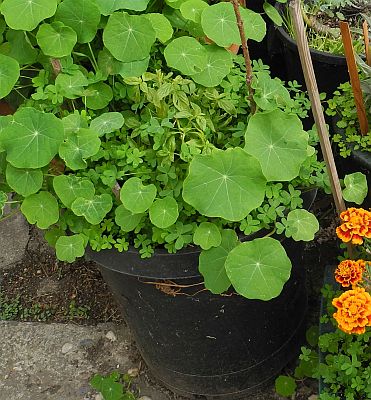 The basil is there in the middle, being crowded out by volunteer nasturtiums (which we will eat later 🙂

The basil was looking on the weary side, and made just enough for the two of us. I pulled the plants and cleaned up all the good leaves I could find (plenty) and left them to dry, and D did the rest. I saw that he used only 1/2 clove of garlic (but they’re pretty big ones on the current head). In addition, pine nuts, parmaggiano, and olive oil go into the small Cuisinart. It was really an excellent pesto – well balanced. We were thinking about a salad to go with the pasta, but I realized we had the makings of a fruit salad instead – D had bought grapes, we had half 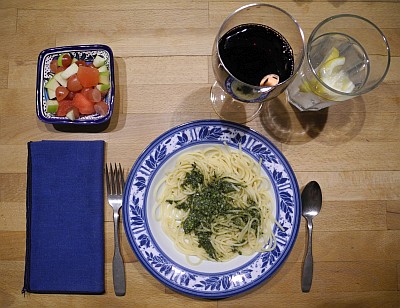 a container of watermelon chunks I cut for the plane, half a Granny Smith apple, some bananas (which we didn’t end up using) and some tangerines (also unused). The salad seemed a bit dry, so D suggested crushing one of the watermelon pieces for juice, and I did that. It was a refreshing salad. Amazingly, didn’t even fight with …. 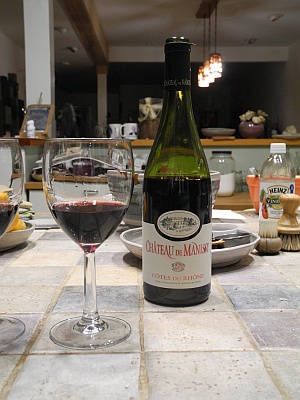 The wine: D brought up a bottle of Chateau de Manissy, and it was a GREAT bottle. Super tasty. Very earthy bottle. This is from The Wine Mine. I don’t think we have much more of it, unfortunately.

We had an Acme Rustic Sweet Baguette with dinner, but it was bought for lunch so its picture is below. In mid-afternoon, I cut off a sandwich-sized piece and froze it, leaving us enough for dinner “pushing bread” and “sopping bread.” 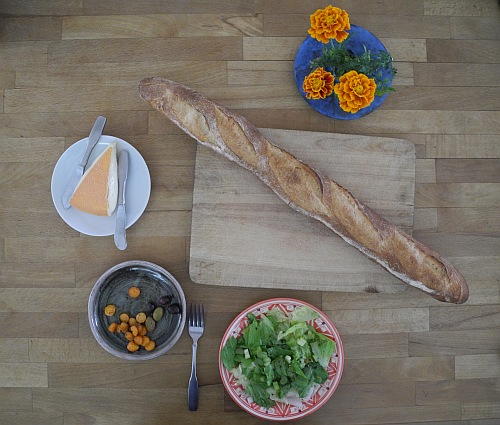 D went to the Bowl before lunch. Of necessity. He got the baguette and grapes, plus a brie-like cheese called “Chaumes” that we have had before. I think we liked it quite well last time, but I was not excited about it this time, perhaps b/c it was still quite cold from the Bowl cheese cooler. Neatest thing: the “baby” bagged carrots we bought at Publix – kinda tasteless – were leftover from the plane trip and D cooked several, cut into rounds, in butter and tarragon, with a tiny bit of sugar. They were tasty that way!

And my cut marigolds survived in our absence, as I expected they would. There is a deceptively large volume of water in these lens vases, and only a small opening for it to evaporate through. 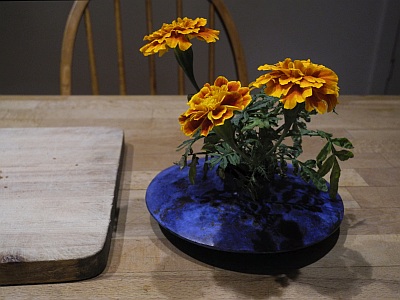