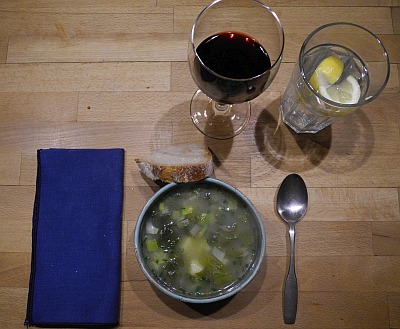 Wow, serious rain! D recorded something like 1.8 inches, close to 10% of our usual annual total, over the 24 hours ending at 8am. So, a cold and wet and grey day, which is perfect for soup. I noted upon our return that the sorrel plants are going great guns, so D bought the other ingredients for a sorrel soup – those being 2 leeks and potatoes. I cleaned and chopped the white and pale green parts of the leeks – I get a medal for this: dirtiest leeks I’ve seen in ages, with mud down in the white parts and way inside – and scrubbed and chopped the 7 potatoes into about 1/2″ dice. I cooked them in 2 Tbsp olive oil and 1 Tbsp butter till they were glossy (potatoes) and translucent (leeks) and texted D that they were done up to the “add 2qts chicken stock” part and I was going to take my shower. So, he didn’t interpret that as where he should take over (usually, this is his soup, not mine) but when I got out and asked if the soup was done he went for it, and finished it up, adding the stock and boiling till the potatoes were done. He brought in chives, but I wanted more and cut a couple more strands (monsters) and chopped them up. The 18 large sorrel leaves I also picked, carefully washed, and stacked, and he cut them into largish pieces (not a julienne or strips, which the recipe suggests, but the chunks do fine) and added most to the soup 5 minutes before the potatoes were cooked through, and the rest to the top before serving.

D bought an Acme Pain au Levain in the morning, and we had it for both lunch and dinner. He chose a wine we’ve had before recently, but we can’t figure out where it came from: Chateau Maris, a Minervois, Old Vine Grenache, 2006 for $15.99. We haven’t loved it, this time or previously, but we must have tasted it to buy more than one at that price. It doesn’t look like a Wine Mine label, oddly, which is the place we would be most likely to have tasted it. Except it’s a 2006, so likely ages ago. Actually, I’m guessing it was from Grocery Outlet, and that it was growing out of date. Some websites say this wine would be over $40, so $15.99 does suggest GO.Preview (opens in a new window) 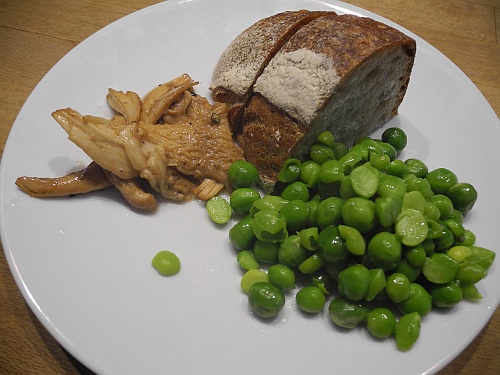 We had really cool lunch! When D went to the Bowl, he found both English peas and chanterelles, and for some reason thought they’d be good together. He was right! He shelled the peas and boiled them 7-8 minutes (checking at 5 mins – still too crunchy) and tossed them in butter in their pan. I cleaned up the one large and very dirty chanterelle, brushing (though it was already wet) and carefully picking off the pine needles, then washing the pieces (had to do this in parts to get the nooks and crannies) to be sure. I had to cut off a couple of bits, even, b/c I couldn’t get them clean.

But finally, I did. I blotted them on a towel, and D cooked them in butter with salt and pepper (which looked disturbingly like dirt bits!). The peas and mushrooms were both great, but most interestingly, they tasted good in the same bite. Great lunch! We also had more of the “Chaumes” cheese D bought yesterday, and the start of the Levain.

D got out grapes for dessert, and I was taking pictures of the grapes and Levain trying to get the right exposure when D turned on the overhead light (grey, dull day) and changed everything. Wow! So I am posting two photos, the first with natural light, altered a bit but color tone unchanged, and the second after the light was turned on.

The wall in back is naturally lighted, so turns blue when the camera adjusts to compensate for the incandescent lighting.