I went to the Tuesday farmers’ market wondering if the heavy rains had eliminated the possibility of more tomatoes from Dirty Girl Produce. But they’re south of here, where it rains less, most of the time, and indeed, there they were with tomatoes. They were not anything like the peak season wonders, but I bought some anyway. I was thinking “soup.” then I looked around and saw some excellent leeks – LONG white parts, with all the useless (though pretty) “leaves” cut off, so you’re not paying for them when you weigh in. Woa – tomatoes and leeks – tomato tart? And we have some of the Henning’s cheddar left! Ah, but it’s past basil season.

I texted D to see if he’d like a tomato tart if I could find some basil and he (at work on R&E’s back door, where the herbs are) pointed out that E had a bit of basil still alive, and would I like it. 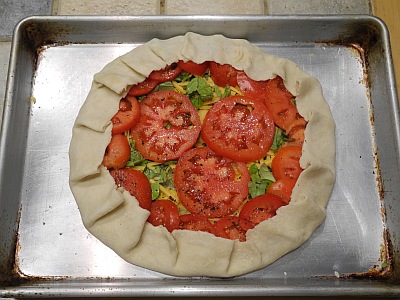 I was skeptical b/c E had considered making an end-of-season pesto the way we did, 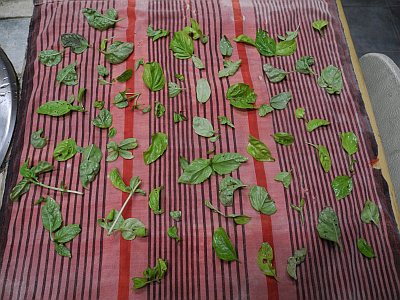 The last of R&E’s basil went into our tomato tart.

but the answer came back “take whatever you like.” And when I got home, indeed the plants had too few leaves to support a pesto, and it was a bit of a chore to get them sorted out (from the dead ones) washed and trimmed. I cut up four tomatoes, one mediumish, the other three small. Two of the small ones were pretty good, but the others had large white parts in them. Amazingly, the tart turned out really well.

I suggested to D that we have English peas along ith the tart, and he volunteered to fix them as long as he could be warned 20 minutes before dinner, so as to get started on them. It turned out that he had forgotten that he’d discovered they needed about 8 minutes, and cooked them for 4 (then drained, heated in butter with some mint from R&E’s front yard), so they were a little crunchy, but still tasted really good.

D chose one of the new Kermit Lynch Beaujolais Nouveaux we got on Saturday, and it went nicely with this meal, which likes a light red

We have a couple of roses out on our yellow rosebush, and at least one bud. 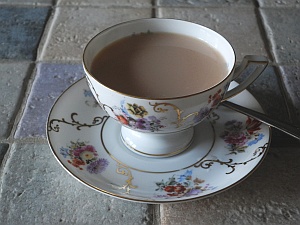 Waiting for D to come down, i made myself tea in one of my grandma’s teacups. The tea is “Teatulia,” a gift from a graduating student. I like it.