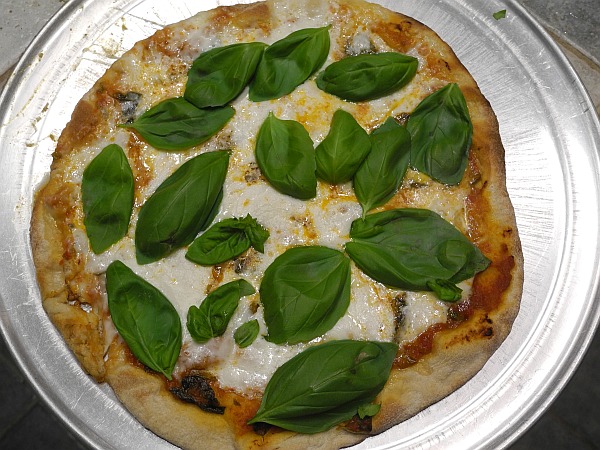 Whoopeee!! Plus, we had a pizza Margherita, always a good thing, not least b/c it’s so easy (once you’ve got frozen cubes of sauce and frozen pizza dough). I defrosted 5 cubes of Margherita sauce, and a 1/3 dough (that had about 1/3 “white whole wheat” flour in it) and pulled quite a few leaves – very large, large, and a couple normal – from our new (these are the first leaves) indoor basil plant for winter.

Margherita is not veggie rich, so I also cleaned up and quartered about 6 seriously large Brussels sprouts, and boiled them in salted water for 3 minutes, then returned to the drained pan with butter, salt and pepper and tossed. I left the pan on low to keep them warm for a few minutes while I dealt with the pizza. 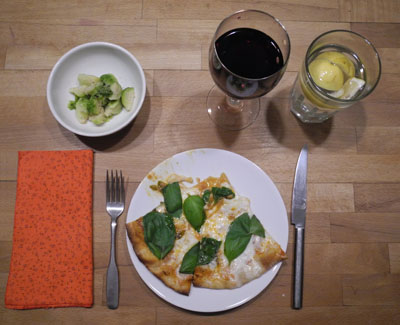 So, the pizza stuck to the stone on one side, and a piece of it pulled off and the liquidy topping spilled and it was something of a mess; but I pulled out the great round pancake turner and grabbed the renegade part and put it back with the rest of the pizza, and it was all fine. Tasted GOOD!

I decided we should have another of the tester wines from Costco, and brought up a Toscana 2015 Sangiovese by Bocelli. It was quite good. When I first opened it, I didn’t think it particularly needed airing, and returned the cork, but later I wished I had opened it a bit more before dinner. But I’d buy more, I think. It cost $11.59.

Normally, computers are off the table at mealtime, but on election nights, they stay. Totally worth it this time!

We had another of the truffles from P&T’s gift from Harry & David – this time, a raspberry one. Very good! 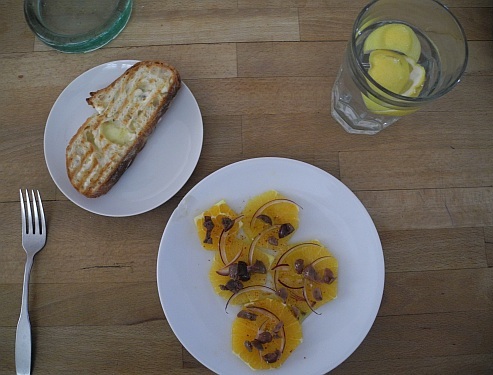 I wanted to show the orange-salad recipe to R, so suggested he come to lunch when E (who has a problem with raw onions) was at work. So, we did that today. Used six slices of the Semifreddi Ciabatta for sandwiches with the last of both the Vermont and the French raclettes, cooked in the panini press. They were great! R didn’t find that the orange salad flavors blended that well, except for one bite, but he may have got a taste on one of his last bites. He liked it, just didn’t think it was a synergy.