A great fall/winter pizza – and a favorite. D really liked/s it and agreed with me that we liked it better than the Cheese Board pizza we had for lunch (got while picking up Fontina Valle d’Aosta for this pizza) – though that was perfectly yummy. I wrote up the recipe here, and have a good printout, so I pretty much followed it. Could use perhaps less oil, since this recipe was for half-crust and I am now using one-third-crust, but really it was great. It’s a favorite pizza and a good-looking one as well. 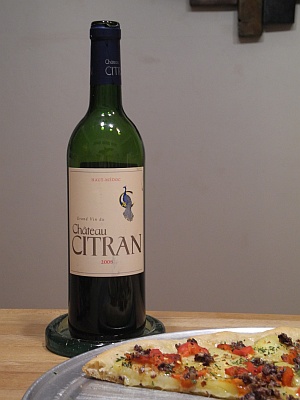 I went to search out wines in the cellar with 1 1/2 hours to spare, so decided I could choose one of the Citrans (Costco, $25) an Haut-Medoc we had first in Germany at the home of a friend/colleague of mine, then found back at home, lost, found at Castagna in SF, and were referred to Costco as a source. Also have found a (much) more recent vintage at K&L.

It was good – the airing (without pouring or decanting, just opening the bottle) I think did it good.

We had another, an especially pretty, pear from the Harry and David stash sent by D’s Dad P and his caregiver T. It was very good, though this year’s pears are not as mind-blowing and life-changing as we have noted in the past.

Another two-pizza day! I was out and about half the morning, ending up at Cheese Board, so, with D’s concurrence, picked up a half-baked, half-pizza. I cut this into quarters, and cooked two at a time (all that fit) in the toaster oven for 5 minutes at 400. Note to self: the second pieces were better done than the first, likely b/c the oven was pre-heated by then. Preheat the oven.

The sign tells all I know about the ingredients. I liked the pizza = enjoyed the novelty of the ingredients quite a bit – but it was not a magical, to-die-for pizza that one comes to expect at CB.