Posted on January 2, 2018 by berkeleybarb 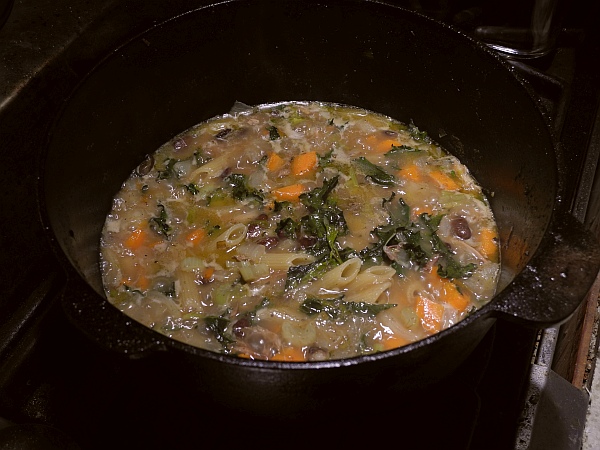 After boiling and reboiling this stock a few times, D finally made it into a soup, and an excellent soup it was! Here are the beans being checked for untoward inclusions:

We tried to use up tiny quantities of old dried beans (limas and kidneys) that D found in a mud-room reorganization a week or so ago, but when cooking them with some pintos, I found that the pintos were done when the older limas and kidneys were still crunchy. I moved all the beans to a plate and returned the two crunchy kinds to the water, but after a half hour, they were still the same. D decided to compost them and continue with just the pinto beans, which made up at least 2/3 of the total. To make the soup, he removed all the bones and veggies from the stock pot ( 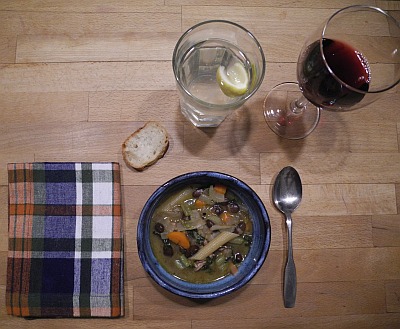 got some bits of chicken into it, though) (and gave some of the stock to R&E). He cooked sweet yellow onions, carrots, celery, and garlic in olive oil, and then added the stock, beans, and finally the kale I picked today from the garden and stemmed (volunteer flat-leaf, which I preferenced over the curly kind b/c the flat-leaf tends to be more susceptible to critters – aphids? – than the curly stuff).

The soup was really good! We both enjoyed it a lot. Wondering if the salt was really high and will dehydrate me and keep me awake tonight… but we shall see. D wants to add some salame secchi tomorrow night (when it is supposed to be raining – good soup weather!). 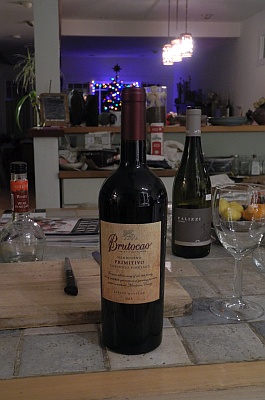 D decided to try the Primitivo from Brutocao (2013) that we bought on spec at the Bowl, to complete a case, when we went for the Irouleguys a couple days ago. We both liked it, but not in an “I must get more of this!” way – much prefer the Brutocaos we got at Grocery Outlet – which someone from the winery recently told D they sold to GO b/c they were different and Brutocao didn’t think they could sell that style. Alas, b/c we liked it better. We still have a Brutocao Pinot Noir from the Bowl that we will try soon.

Here’s the wine on the table, with a defrosted bit of Acme sweet baguette: 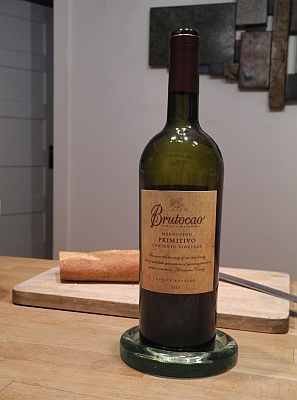 I wanted dessert, and D chose chocolate over fruitcake this time (I was leaning that way, too – we had fruitcake last night). that would by Harry & David chocolate. I said we should leave the simpler chocolate flavors to have with the rest of the tempranillo dessert wine, so D said cherry or raspberry then?I pointed to one with red stripes, and that was cherry. It was tasty 🙂

We had sandwiches using defrosted slices of Acme Italian Batard, which we bought

Saturday before the Bowl went on two-day hiatus the 1st and 2nd. Used up the last sliver of tomato (salted and peppered)from the burgers, some romaine, planed bits of Ossau-Iraty cheese from Cheese Board, thin-slices sweet yellow onion, and mayonnaise (and mustard for D). This made a terrific sandwich! I boiled up the last four Brussels sprouts, quartered, for 4 minutes, then drained them, dried the pan over heat, and melted butter, tossed in the sprouts, salt and pepper – as usual.