Posted on January 4, 2018 by berkeleybarb 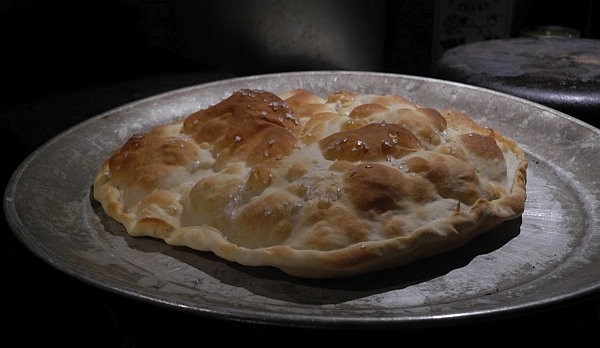 Went to the p.o and found NO MAIL after not going since the 27th. Could this be true? I went to the Bowl late, not just when they reopened, to get bananas for breakfast, mostly, but then I also decided I wanted mixed sautee greens to have with dinner. The “foccacia” is unyeasted and involves rolling a flour/water/oil dough out thin, and then rolling the top piece even thinner, so I wanted to do that and then take a shower before dinner, so I enlisted D to put the foccacia in the oven a few minutes after I left and then take it out 1 minutes later. Tried making it w/ a soft-taleggio-substitute I got at Cheese Board and which needed finishing up – Bresciella – but IMO it was too strong a flavor for this dish. D liked it fine, though. I gave him part of my second quarter. I sprayed the bottom layer with water using the Misto and pressed the layers together thoroughly after dotting on the cheese, but it puffed up anyway. I don’t know how I have gotten it to stay nicely down in the past – not rolling as thin so it’s heavier??

I tried a 1/5 recipe this time, which was a pretty decent size for the two of us. I’ve typically used 1/3, [LOL! That recipe was also on 3 January :)] and also have notes for 1/4 recipe. For 1/5 recipe: mix 1 cup flour with 1 Tbsp and 1/2 tsp (not really measured that carefully – overflowed the Tbsp) EVOO, then add just short of 5 Tbsp tepid water and mix. I mooshed the dough a bit before wrapping in waxed paper and letting it sit inside a small mixing bowl in a pan of slightly warm water, covered, for an hour. The water treatment would not be necessary in a warm room, but it’s January. I kneaded the ball in my hands a bit after the hour, and the dough ended up very nice and pliable. Split into two pieces, one larger than the other by a bit but not 2x, and rolled. The top layer needs to be thin enough for you to see the bread board through it. Dot the bottom with cheese, spray lightly with water for sealing, layer over the very-thin top layer and press, uselessly, between the cheese bits, and bake 500 degrees about 10 minutes.

I was not careful with picking the greens from the almost-out bin of saute mix, and got some really unhappy chard leaves, but the rest – dino kale, radicchio, curly kale, other(?) – was great. I washed once, tore or cut into 1 1/2″ or so pieces, put into the salad spinner, rinsed again, drained (it’s raining, so no use tossing out front – saved me some time, just dumped the wash water) and spun, then laid on a towel until D could saute it while the focaccia cooked. Usually we give this a bit of water and let it steam after wilting in oil, but this time it was just sauteed, so the “braised greens” tag is a bit off. 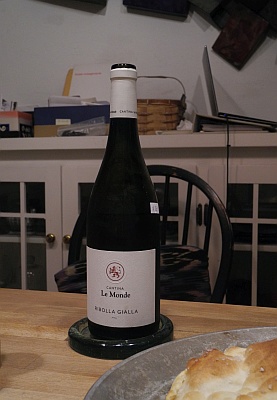 I thought the foccacia was usually served with a white wine, and D found the Cantina Le Monde Ribolla Gialla (2016) from Wine Mine in the fridge. It was annotated Fish Dinner, but I said what the heck let’s try it. It was also annotated “not your run of the mill white,” which was certainly true. And we should have had it with a non-salmon fish (something simple, like tilapia) but D thought it went really well with the cheese. I thought it was fine, but would like to try it the way we intended for it to be used, if they have any more (which is unlikely, at Wine Mine).

Later, D cut a thick chunk of fruitcake and halved it for dessert. Meaning it’s still sorta Christmas. Besides, the tree is still up.

[Here ends the vegetarian portion of our program.] I goofed and forgot D wanted to add mushrooms to his great wild rice-mixed rices thing that he cooked with the smallest bits at the end of using the capon. He was nice about it (of course). We reheated that, and also I cooked up the other half of the small zucchini I had bought intending it to be one meal for two. D overestimates how much veggie something will make, I think. Anyway, there was half a zucchino 🙂 left and I cut it into half-moon slices, cooked it in EVOO and added a bunch of dried dill weed (and salt), an old favorite way to serve zucchini. I also opened the P’tit Basque half-round of cheese we’d gotten at Costco last visit (Dec) and cut a wedge for each of us, putting into a slightly-heated, open toaster oven till lunchtime to warm it up a bit, since I didn’t think of it till late.