[Filling in missing entries on 8 Feb]

This was a kick. D flying home and had a wine tasting with his lunch at Vino Volo, trying the “value reds” this time. He really enjoyed the Mencia and texted me about it – maybe he’d pick up a bottle to bring home. I was in the process of asking him if he’d want dinner, given he’d be home more or less in time, and he said yes. So we negotiated a plan for a dinner to set off the wine. After a couple of my suggestions, he asked for this Weber Art of the Grill recipe. We had maybe 1/4 or less of a small head of radicchio left from a previous dinner and subsequent dishes, and I bought one Belgian endive. Split each, rubbed with olive oil, and grilled over medium heat – I think about 5 minutes on the first side and less on the second. And even less, for the radicchio, on its third side. The endive didn’t have any third side 😉 Walnuts toasted in the pan, Roquefort smooshed into a walnut oil/red wine vinegar dressing. Cooked fettucine tossed in the veggies and dressing and served in heated bowls. 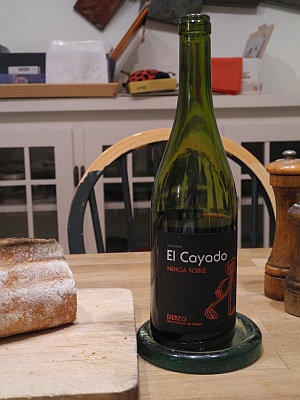 I bought D an Acme Italian Batard b/c it seems to be his favorite.

The Mencia – El Cayado Mencia Roble (2013 – denomination “Bierzo”)- didn’t have a lot of time to breathe between D’s arrival and dinner, and D thought it was not as enticing as he’d found it back at Vino Volo. However, we did really like it, and enjoyed it with the meal. Just don’t have to search all over to find more of it.

Sandwich. This part is meatful 😉 Pretty sure I remember correctly that this was another – the third? – of a series of sandwiches to use up both pancetta and roasted yellow pepper. I cooked pancetta, then topped one slice of bread with a slab of the roasted pepper and the other with Danke cheese and broiled them (to melt the cheese and warm the pepper) then put the pancetta in between and closed the sandwich. I had some yellow pepper left after D arrived so I’m sure I must have continued these sandwiches up to today to use it up.