Posted on February 6, 2018 by berkeleybarb

My old notes on the grilled pork tenderloin recipe that we made the 3rd say that it’s worth making just for the leftovers, to use in sandwiches. These were really fine sandwiches, but not as obviously fabulous as the notes suggest. Maybe I wiped off too much of the marinade before grilling (but I did drip some back on when D objected). Anyway – good sandwiches, on defrosted Acme Italian bread with just a bit of romaine and mayonnaise – and later we decided I should have salted and peppered the pork (duh), so we did that at the table.

D brought an appetizer: a piece of cauliflower – and then later the small bowl of leftover dressing from lunch, that had not fit into the storage jar. Delicious!

I cooked up a pile of Brussels sprouts – trim and clean, split to 4ths or 6ths depending on size, boil in salted water 3 minutes, drain. I decided to cook them a bit early so they had more time to drain, and I tossed them a bit in the colander before  returning them to the heated (ergo dried) pan with melted butter, salt and pepper. 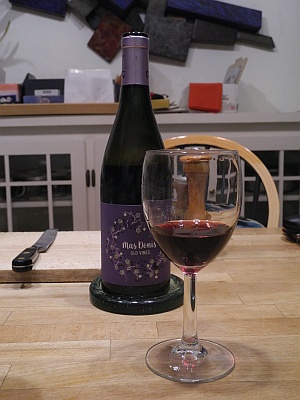 At Costco during the superbowl (hey, I thought nobody would be there – oops!) I talked with the wine assistant and he showed me some wines, one of which, bc of its somewhat tacky purple label, I wouldn’t have looked twice at. It was a cheap grenache/syrah (85:15) blend called Mas Donis, and he said it was good for a cheap wine. And it was, but D thought it still had harsh edges. Or that it had a bitterness. I thought it was fine. We had it with this meal b/c the pork recipe actually suggests a grenache/syrah blend, and it was sandwiches, so somehow it seems ok to have a cheap wine with those. Not that we wouldn’t have a pricey one sometimes 🙂

Oooo, special lunch! I made up the family-friend recipe from D’s parents’ friend V, for “French dressing,” which includes ketchup or Chile sauce (ketchup in this case – Bowl may still not have Chili sauce, but forgot to check) sugar, vegetable oil, vinegar, and bits of Tobasco and Worcestershire sauces, and salt. D brought this idea from his childhood – having an avocado half (but they were monster FL avos, so one half was a lot) topped with cottage cheese and this dressing. It’s delicious! D defrosted two sticks of Acme sourdough baguette, but we used only one and I refroze the other.