We put off (again) a pork roast of some kind, in part b/c we haven’t settled on what kind that’s going to be, and partly b/c it’s Sunday and going to the Bowl is not optimal on the weekend. So: pork tomorrow, to have with the Ventoux we are trying out – again, as it turns out. More tomorrow. I said let’s have fried eggs and sausage, and D thought that would be fine. He had two eggs to my one, and I two sausages (and two slices of toast – Morell’s multigrain) to his one. I offered to go buy him some Acme Italian but he thought this would be fine for toast (of course it is!) D cooked up the three Riverdog Farm Country Sage sausages (pork, salt, sage, rosemary, pepper) and plopped a halved tomato (early girl, also from Riverdog), with some thyme under it I think – into the pan after the sausages were mostly cooked. 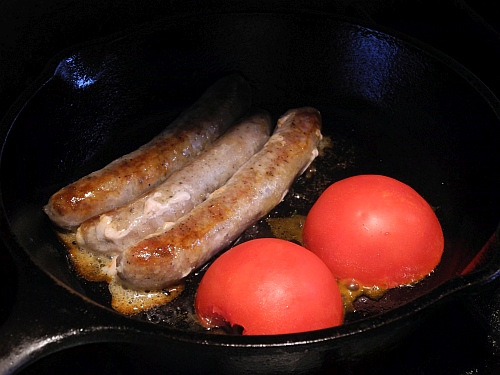 Great idea! I prepped and boiled up the beans for 3 minutes in salted water, then returned them to the pan with butter and left on low till the rest was done. I also toasted the defrosting bread and buttered it, then put it with the plates in the slightly-heated toaster oven to keep warm. We each cooked our own eggs. I am very picky about my fried eggs and I think D likes his done very differently.

I asked earlier what sort of wine we would have. D thought a minute and said beer would go well. I realized the reason I don’t love having beer for dinner is it’s a lost wine opportunity, but D thought it would be good, and indeed, it was a fine match. We had R&E’s Saint Patrick’s Stout, and it went especially well with the sausage, I thought. The sausage and tomato also went well together. 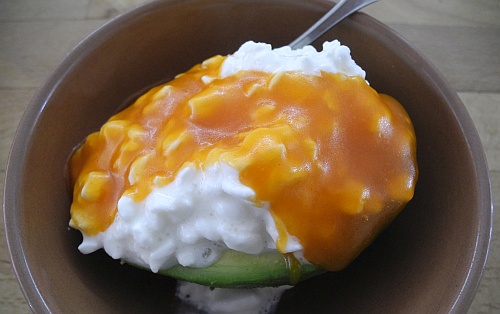 Had a “2x” sized avocado with the last of the cottage cheese and nearly the last of the VJ’s-recipe French Dressing on it. Yummy, as always. Also very easy and quick, which was good b/c we had been on “our” trail and got home a bit late. It was “raining” large drops from the trees, b/c the trees had captured lots of fog, and the wind was blowing it en masse to the ground. I actually thought it must have started to rain, but it was not raining where there were no fog-catching trees, so clearly that was what it was. So, we got home late, did a bit of a workout, and finally had lunch not long after b/c it was quick and easy.

Also, no prob b/c we had a Luna Bar at the top of the trail when I got dark flashes (“that’s you, passing out” said my dr., with absolutely no apparent concern, when I mentioned it last visit). We needed to eat the Luna Bars anyway – they’re from our “go bags” and expired last week, so have been replaced. The lemon one is my favorite, by far.